"We cannot hope to fight them, but we can still sabotage their efforts."
―An unknown Mongolian Assassin.[src]

The Mongolian Assassins were one of the few groups who fought against the Mongol hordes. Although they were few in number, they were able to slow down the campaigns of the Mongol Empire on several occasions.[1]

When the leader of the Levantine Assassins, Altaïr Ibn-La'Ahad, his wife Maria and their son Darim traveled to the Mongol Empire to stop the Mongol leader Genghis Khan, the Mongolian Assassin Qulan Gal assisted the family. After making several plans, Qulan Gal and Altaïr infiltrated the Mongol camp in Xingging, near Xia Province. However, Altaïr had lost some of his skills in his old age and accidentally alerted the Mongols, being wounded in the process.[2]

Qulan Gal was able to bring him to safety, and upon spotting Genghis Khan fleeing on horseback, shot his horse with an arrow from his bow, allowing Darim to finish the Mongol leader with a final bolt from his crossbow.[2]

In 1265, a member of the Mongolian Brotherhood, Nergüi, assassinated Hülegü Khan, the grandson of Genghis Khan, in retribution for his sacking of Masyaf and the destruction of the Levantine Assassins.[1] 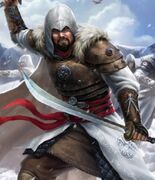 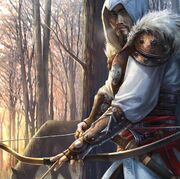 A Mongolian Assassin with a bow

A Mongolian Assassin infiltrating a camp