In 1520, Hernán Cortés and his Spanish fleet visited the Aztecs and Tenochtitlan, looking for gold. Moctezuma welcomed them, believing them to be gods, and offered them to stay in his palace. However, during their stay, the Spanish grew disgusted by the Aztecs' customs and rituals. During the Festival of Toxcatl, the Spanish massacred the Aztecs, and Giovanni Borgia, an Italian Assassin who had infiltrated the Spanish army, took a Crystal Skull from an Aztec priest.

The Spanish held out in Moctezuma's palace and kept him hostage, forcing him to talk with his people so he could buy the Spanish time to escape. He spoke to his people, though blaming himself for the massacre. He told them this was a test of faith, and asked them to return to their homes. The Aztecs did not give in to his request, and began throwing rocks towards the palace. One of them hit Moctezuma's head, resulting in his death. 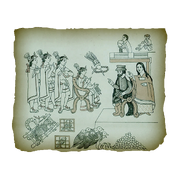