"While the husband was out playing war, the wife was at home raising an army of her own."
―Hattori Hanzō regarding Chiyome.[src]

Mochizuki Chiyome (望月 千代女, died 1590s) was a noblewoman who lived during Japan's Sengoku period. She was credited with creating an all-female group of ninja, named kunoichi, for her uncle-in-law, Takeda Shingen. Numbering over a hundred, Chiyome's girls were used as spies and assassins; by posing as couriers, servants and even prostitutes, they created the illusion they were everywhere. Despite its legendary status, her kunoichi organization was unable to prevent Hanzō and Honda Tadakatsu from infiltrating Shingen's camp in 1573, after which Shingen was killed.

Chiyome was eventually recruited by the Templars, who had attempted to expand their influence in Japan but found themselves hindered by the constant wars between clans, as well as their hostility toward outsiders. Through Chiyome, the Templar philosophy spread throughout the land, which made her a target for the Assassin Hattori Hanzō. Sometime in the 1590s, he proved successful in assassinating her. 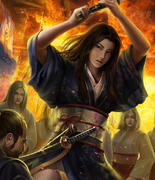 Chiyome with her kunoichi