Assassin's Creed Wiki
Register
Don't have an account?
Sign In
Advertisement
in: Articles that need updating, Pieces of Eden, Personal weapons,
and 2 more

The Mjölnir was a Piece of Eden fashioned in the form of a war hammer which served as the personal weapon of the Isu Thor, which was said to grant him great power and the ability to harness electrical energy. It was later found by the Viking shieldmaiden Eivor Varinsdottir of the Raven Clan and claimed for her own.

Mjölnir's first wielder was Thor, an Isu belonging to a Northern European group called the Æsir. He used Mjölnir's electrical powers in tandem with his personal set of armor. He continued to wield the hammer until his death alongside the rest of the Æsir during the Great Catastrophe, which would later be known to humans as the mythical "Ragnarök". After Thor's death, Mjölnir was lost to the world until its rediscovery millennia later embedded in a mountainside in Hordafylke, Norway.[1]

In the late-9th century CE, Mjölnir was recovered and claimed by Eivor Varinsdottir of the Raven Clan, Norsefolk who had relocated to England to escape the rule of a unified Norway under Harald Fairhair.[2] After reclaiming each piece of Thor's armor from various strong enemies across England, she returned to Norway to claim Mjölnir for herself.[1] 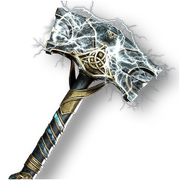 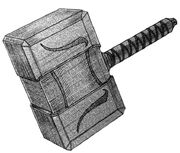