"I am not used to the... calculations. That has always been Minerva's domain."
―Jupiter to Desmond Miles, on Minerva's skill with numbers, 2012.[src]-[m]

Minerva was an Isu scientist, Sacred Voice, and a member of the Capitoline Triad. As part of the Triad, she worked in close collaboration with the Father of Understanding Jupiter and the Mother of Wisdom Juno to prevent the First Disaster, and its recurrence.

Although the original cataclysm doomed the First Civilization as the Isu were unable to save themselves in time, Minerva was among the survivors. With her people's extinction imminent and approaching the end of her own final days, Minerva did what she could to prevent powerful Isu weaponry being inherited by humanity.

To that end, she focused on the lost Trident of Eden, and engineered the Ascendance Event so that humans were in a position to destroy the artifact should it ever be uncovered.[4]

In 2012, a holographic projection of Minerva recorded before her death and acted in her stead, spoke with the First Civilization descendant, Desmond Miles, through the Prophet, Ezio Auditore da Firenze—another descendant—before speaking with Desmond directly upon his arrival at the Grand Temple.

Minerva was known by many names both throughout and after her lifetime due to her long life and legacy as a goddess to humanity. Her earliest known names were Merva and Mera, but with the evolution of human religion, a number of distinct and sometimes contemporaneous appellations arose. She was known as Athena to the ancient Greeks and Egyptians;[4] Minerva, Athena's Roman counterpart who shared her portfolio, to the ancient Romans; and Saraswati[4] to the Hindus. Other names included Sulis[4] from the Celts (also conflated as Sulis Minverva[5]), and both Vör[4] and Gunnlöð from the Norse.[6]

Minerva was present at Saturn's assassination by his human servants just as he was agreeing with her assessment that humanity's potential was growing beyond their creation as an Isu slave workforce.[7]

"Each vault's knowledge was transmitted to a single place. It was our duty—mine, Minerva's, and Juno's—to sort and sample all that was collected."
―Jupiter, in the Nexus.[src]-[m]

During the human uprising, and the subsequent Human-Isu War, Minerva was counted among those who avoided the battle in order to find a means of preventing the destruction of both races.[8]

After having discovered the impending solar flares, Minerva assisted Jupiter and Juno in building several underground Temples to research solutions. The three were also given the responsibility of managing the Grand Temple, the central hub where all information from the lesser Temples was gathered.[8]

Though they tried and tested six methods with increasing success, the catastrophe struck before any could be implemented. The disaster burned the Earth for weeks, and wiped out nearly all members of humanity and the First Civilization.[8]

Minerva lived on alongside the survivors, and like many other members of her kind, was upheld by humanity as a goddess. She was given many names, including Merva and Mera, and eventually died known as Minerva.[8]

During the Peloponnesian War, the Spartan misthios Kassandra encountered a woman posing as the goddess in Korinthia. The woman claiming to be "Athena" tasked Kassandra with completing various tests to prove her worth.[9][10][11][12] Some time later, inside Aletheia's simulation of Atlantis, the Spartan encountered the Isu botanist Neokles who was concerned that she was a follower of Minerva when she asked if Atlantean flora was able to grow without artificial assistance.[13]

"Let my words preserve the message and make a record of our loss. But let my words also bring hope."
―Minerva to Desmond.[src]-[m]

On 28 December 1499, Minerva appeared to Ezio Auditore as a holographic form within one of the Temples, known then as simply "the Vault". However, she greeted him only as the Prophet, as he was merely a method of her speaking with Desmond Miles, who would relive Ezio's memories through the Animus.[14]

Minerva briefly "gave thanks" by touching the Apple of Eden Ezio held, and corrected his misconception that she was a goddess, as she merely was one of those who "came before". Despite Ezio remarking in confusion that they were the only two there, Minerva told him that she was only speaking through him, and addressed Desmond directly.[14]

Minerva spoke at length of humans being the creations of her people, as well as the details of the war, and the First Disaster. Wishing her message to bring hope to humanity, she told Desmond to find the Temples and recover the work that she, Jupiter, and Juno had been performing, so that the world might be saved. After entrusting this responsibility to Desmond, as well as warning him against "the Cross", Minerva's image vanished.[14]

In 2012, after having viewed Ezio's encounters with Minerva, Desmond's team of modern-day Assassins realized that Minerva's "touch" had altered Ezio's Apple of Eden somehow, and would allow them to find the scattered Temples. As such, they set off for Rome, in an attempt to retrieve it.[15]

Some time after this, Desmond also spoke with Jupiter, who mentioned Minerva briefly, and commented on how calculations had "always been Minerva's domain".[8]

Inside the Grand Temple

As Desmond and his team gained access to the global aurora borealis device in the Grand Temple on December 21, 2012, they learned of Juno's plot to enslave the world, and of her being sealed into the Grand Temple from Minerva, who arrived, much to Juno's chagrin, in time to give Desmond a choice: let the world burn and allow what few humans who survived to make their own destiny, or save the world and allow Juno to enslave it.[3]

At Juno's prompting, Minerva then showed Desmond the future: if Desmond allowed the Sun to destroy the Earth, the ground would crack and spit fire into the sky, but he and his Assassin team would emerge from the vault unscathed, resolving to lay a foundation that such a tragedy would not befall the world again. Desmond would become a symbol to those who had survived, and would inspire them to rebuild their world. As the world would heal, so too would humanity.[3]

Eventually though, Desmond would die, leaving behind only a memory, a legacy. He would first be remembered as a hero, then a legend, and then eventually, a god. All words not his would be decried as heresy. His words, originally meant to give life, would be used to justify slaughter. His death would give rise to a new iteration of the Templars, and history would again repeat itself. Minerva was prepared to accept this, however, since at least humanity would have the freedom to choose that path.[3]

Desmond would go on to take Juno's choice: to die and protect the world from the Sun. He believed that whatever Juno had planned, those who survived would find a way to stop it. Despite Minerva's pleading, Desmond touched the pedestal, burning his body and ultimately killing him. With this, Juno was released upon the world once more, while Desmond's body collapsed to the floor of the Grand Temple.[3]

In 2018, through an Animus modification of Layla Hassan, one of the lieutenants recruitable aboard the Adrestia in her Kassandra session was named Athena based on the goddess.[16]

In Greek pantheon, Athena was among the twelve mightiest,[16] having been born from the head of Zeus.[17] She was regarded as the goddess of wisdom, battle strategy, arts, commerce, and crafts,[17][16] gaining multiple epithets along the way.[16]

As such, deeds she was said to have performed or have been a part of were numerous. Among the most notable of these was her rivalry with Poseidon over the patronage of the polis Athens.[18][19]

The contest between Athena and Poseidon begun when Kekrops, the first king of Attika, found himself in need of a patron deity for his city. While Poseidon offered either a salty spring or a horse, Athena struck the ground with her spear, and an olive tree sprouted from the spot. Athena's gift was deemed more valuable, and thus she won the contest and the city became known as Athens.[19]

Another tale recounts how Athena built the legendary ship Argo with Argos the shipwright. While Argos did most of the work, Athena allegedly carved the bow of the ship from one of the sacred oaks in Dodona.[20]

In the story of Perseus, the legendary founder of Mycenae and the slayer of Medusa, Athena aided in his task to defeat the Gorgon by giving him a mirror-bright bronze shield.[21]

Athena also helped the hero Herakles with at least some of the tasks assigned to him by King Eurystheas of Mycenae. Athena gave Herakles a golden sword with which to cut the Hydra's immortal head.[22] She was also there when Herakles cleaned up the stable of King Augeias of Elis.[16] She gave the rattle Hephaistos had crafted to Herakles to help him with the Stymphalian birds.[23] And she aided him[16] when he was told to retrieve the golden apples from the garden of the Hesperides.[24] [25]

One of Athena's iconic features is the garment she was said to have worn, the Aegis.[26] In artworks of Athena made by ancient Greeks typically presented this as a sash with snakes and the Gorgon Medusa's head.[16]

Minerva is a mythological figure and character introduced in Assassin's Creed II where she is voiced by Margaret Easley. Historically her known aliases and names were actually separate deities. Created as an "Isu", the Assassin's Creed series' ancient civilization that predated everything.

Minerva's name is ultimately derived from the Proto-Indo-European root *men-, meaning "mind, understanding, reason; to think." Although Minerva claims to have been once known as Merva and Mera, historically Athena was never known by these names. Athena/Minerva's Etruscan name was Menrva.

Minerva was represented by one of the statuettes that could be collected in Monteriggioni, and could be paired with a statue of Jupiter. The pair's description read "Here sits the king of all Olympus, and beside him stands Wisdom, to guide his rule." The statuette of Minerva seems to be based on the statue of Athena sculpted by Leonidas Drosis for the modern Academy of Athens, making its presence in the game anachronistic.

In Assassin's Creed: Renaissance, Minerva was seen in the Vault with an owl on her shoulder. The owl, frequently associated with Athena, has come to be known a symbol of wisdom in its own right. In the novel, Minerva's speech to Desmond was also replaced by her explanation of her existence to Ezio, with no mention of Ezio being the Prophet.

Through real-world syncretism, Minerva was revered as 'Sulis Minerva' by the Romano-Britons of Bath, Somerset in the United Kingdom.[27] Notably, Bath is where the Aegis armor, said to have been worn by Minerva, was found by Michel Reuge in Assassin's Creed: Syndicate and the Isu herself stated that Sulis was one of her many aliases in Last Descendants – Fate of the Gods. 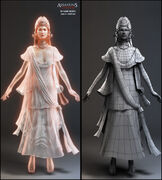 A vision of Minerva during the Tunguska explosion

Minerva (center) alongside Juno and Jupiter

The statuettes of Jupiter and Minerva in Monteriggioni 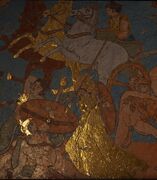 A metope featuring Athena helping Herakles with his fifth task

A metope featuring Athena, Herakles, and Atlas the Titan during Herakles' eleventh task