The Mercenary (harvested from: Kumi Berko) was an Animi Avatar used by the entertainment branch of Abstergo Industries, as part of their plan to influence the general public, via the console stage of the Animus technology. He wielded a pair of pistols as his specialty weapon.

The Mercenary had several unique moves:

Facing his target, the Mercenary pulls out one of his pistols and levels it at their face, to which they manage to react quickly enough to snatch it out of his hand. Undeterred, the Mercenary spins around and uses his second pistol to shoot his victim in the head, killing them instantly. As they collapse backward from the blow, the confiscated weapon flies from their hand and is neatly caught by the Mercenary, who then returns both of his pistols to their holsters.

Approaching from behind his target, the Mercenary pulls out his pistols and then savagely kicks them in the back of their knee, causing them to kneel in pain. Giving his victim no time to react, he fires a single shot into the back of their neck, ending them suddenly.

Rushing towards his target, the Mercenary grabs them by the neck and throws them to the ground, where they clumsily land. As they scramble to get back up, they see the Mercenary grabbing his pistols and raise a hand in an attempt to stop him, to no avail. He swiftly fires two rounds into his victim's chest, leaving them dead on the ground, before he holsters his two weapons.

Sprinting behind his target, the Mercenary grabs his pistols and uses one to sweep the legs out from under them, who then lands harshly on the ground. Wasting no time, he fires a round into his victim's heart, killing them instantly, before subsequently stashing away his weapons.

Closing in on his target, the Mercenary pulls out his pistols and bluntly aims the one in his left hand at their head. Acting on pure instinct, the victim manages to slap away the weapon, but is quickly punished for said action by the Mercenary, who cruelly pistol whips them with his other firearm. Having briefly stunned his target, he then kills them with one fatal shot to the head, before holstering his weapons.

Nearing behind his target, the Mercenary, with pistols drawn, roughly spins them around. He then shoots them once in the knee, unbalancing them and causing them to fall forward. Interrupting his victim mid-fall, the Mercenary harshly bashes his pistol into their head, possibly fracturing it. Following this, he stores away his weapons as his target dies a painfully slow death on the ground.

Jumping down from above, the Mercenary cushions his fall with his target's body, simultaneously immobilizing them. From there, he aims one of his pistols at his victim's forehead and fires, killing them instantly, before walking away.

Grabbing his seated target's foot, the Mercenary drags them off the bench until their head rests against it. Before his victim can do anything to defend themselves, he forcefully kicks them in the face, violently sending their head backwards and breaking his target's neck on the bench behind them.

The Mercenary could be customized in several ways:

Promotional art for the Mercenary

Concept art of the Mercenary 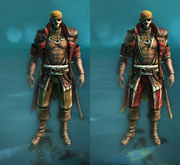 Pirate and Magnificent Costumes for Mercenary 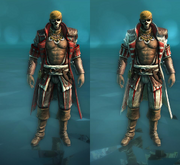 Templar and Assassin Costumes for Mercenary 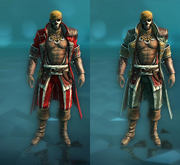 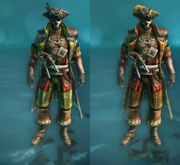 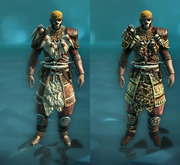 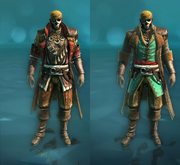 The Mercenary killing the Lady Black

The Mercenary and the Puppeteer performing a sync kill

Retrieved from "https://assassinscreed.fandom.com/wiki/Mercenary_(Black_Flag_Animi_Avatar)?oldid=831110"
Community content is available under CC-BY-SA unless otherwise noted.