The Memory Corridor was a digital construct that allowed the Animus to recreate accurate images from a subject's genetic memory. It appeared to the user as an empty virtual space located within the Animus. When the memory loaded, the virtual environment would be recreated over the memory corridor.[1][2][3][4]

The corridor was mainly used as a "loading screen" between memories, where the user could roam around while a memory was being compiled. The memory corridor appeared to be an endless void, having a different appearance in each software version of the Animus. If the user was desynchronized while reliving a memory, his or her avatar returned to the corridor, allowing the memory to reload.[1][2][3][4]

Additionally, the final moments of assassination targets were displayed in the memory corridor, where they would have shared their final words with their killer, before receiving their last rites.[1][2] It was also utilized as a location for the tutorial for Desmond Miles, during his first use of the Animus at Abstergo Industries' facility in Rome,[1] and later as an interface for Rebecca Crane's Animus Virtual Training Program.[3]

The Animus was the primary exemplar of using memory corridors. Within the Animus, memory corridors were a computer -constructed method to allow the user to interact with the avatar while the memory compiled. The appearance and duration the user was left in a corridor varied between Animus versions.

The Abstergo Industries Animus 1.28 originally had an icy-blue background, in which simulated fog and strings of computer code existed. The user could move the avatar of their ancestor freely around this simulation and could use all weapons. This provided the user with the opportunity to experiment with their weapons while allowing new memories to load.[1]

The background of the Animus 2.0 and its 2.01 update was light grey with white lines. It existed as the main corridor used within the virtual machine, coming to be known as the "White Room". In the Animus 2.0, an avatar could only be made to run or walk around, but this restriction was removed in the upgraded versions, allowing the user to use weapons as well.[2]

During some instances, the background changed for certain memories, such as repressed ones, or traumatic parts of the ancestor's life. Examples of repressed memories included some of Ezio Auditore da Firenze's experiences with Cristina Vespucci, one of his lovers during his lifetime, and rendered with a ghost-like Ezio chasing another phantom figure, Cristina, through a dark, red-hued corridor with floating binary code. This corridor remained for a much longer time than most other memories, and the memory could take a very long time to compile.[3]

Pax Romana was another example of a traumatic memory, in which the memory corridor took on an orange coloration with broken fragments of data. This occurred when Desmond first tried accessing the memory after the death of Cesare Borgia, once Ezio had thrown Cesare off of the Viana Castle battlements.[3]

The safe mode program built into the Animus, known as the "Black Room", had a varying dark and bright blue background with black lines, the polar opposite of the appearance of Animus 2.03 in its stable condition. This portion of the memory corridor was used when Desmond Miles fell into a coma following his first encounter with Juno. Like its predecessors, the "Black Room" allowed the user to roam freely while the memory compiled.[4]

During the first training stage of the Animi Training Program, the memory corridor appeared to be a combination of the Animus 1.28 and 2.03. It had both a blue, fog-filled background and white lines.[3] The corridor within the Animi that was used for the second stage of Abstergo's training program had a gray background with cubical fragments. Unlike other memory corridors, these did not allow for free roaming. [4]

As part of Abstergo Entertainment's rendition of the Animus as a game console for consumer interaction, in order to influence the general public, the virtual machine was displayed in a similar manner to the Black Room of the Animus 2.03.[6]

Accompanying this, a large symbol of the Abstergo Industries' logo could be seen spinning in some instances, alongside a bokeh graphical design that transitioned from blue to orange.[5]

In the Animi that were installed in the Abstergo Entertainment Headquarters, the Corridor had a blue-green coloration and seemed to have ocean waves in the background, both indications that the Corridor may have been tailored to fit the naval theme of the Sample 17 Project that the Animi were all focusing on.[7] The Identity Project also follows the same background, although the project is not related with the ocean.[8]

Later versions of the Animus Omega featured a darker, deeper blue color with fog, particles and waves. A different colored variation was also seen when accessing memories where the ancestor subject was poisoned.[9]

While the first iterations of the Helix servers did not feature a Memory Corridor,[10] by the time of Helix 4.0, a Corridor was present, being mainly an off-white color with grey fog in the background. Additionally, white rectangular prisms of varying heights could be seen near the ground, while taller structures rose up in the distance.[11]

Effects similar to the Animi memory corridors appeared elsewhere. The corridors did, however, always relate to the conveying of memories. They appeared both in the Bleeding Effect and First Civilization memory seals.

While viewing the memories of Altaïr Ibn-La'Ahad that were stored on memory seals, the memory corridor developed golden symbols similar to those embedded on the Masyaf Keys. Accompanying this, once Desmond had completed the remainder of Ezio Auditore's genetic memories, he achieved a Synch Nexus and conversed with Jupiter, Juno and Minerva of the First Civilization. During this meeting, golden symbols surrounded the group in the memory corridor.[4]

When a person experienced the symptoms of the Bleeding Effect, they would encounter an occurrence similar to a memory corridor. At first, figures and objects in the memory would appear to be white on a black background, though they would optimize in more detail, until a point where the memory corridor disappeared and was replaced with an actual memory, in a similar manner to the Animus' virtual representation of one. As the Bleeding Effect receded, so did the corridor.[2]

When an Assassin completed an objective, the subject reliving the memory would often enter a memory corridor and witness a conversation between the Assassin and the target. This conversation would yield insight into the target's motives or actions.[1]

Memory corridor of a repressed memory.

Ezio in a Memory Seal corridor. 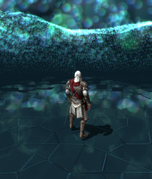 Bayek in the Memory Corridor with Medunamun.

Aya and Caesar in the memory corridor.

Eivor Varinsdottir fighting a manifestation of Odin in the memory corridor