A megalith is a structure, monument, or complex erected from one or more roughly hewn, giant stone slabs. They are invariably associated with prehistoric human cultures, with the most famous example being Stonehenge. Megalithic constructions on a smaller scale include singular standing stones and stone circles, which are stones clustered together in a circular arrangement.

During the mid-1st century BCE, the Medjay Bayek of Siwa frequented the stone circle outside of Siwa with his son, Khemu. During their stays at the circle, they discussed the stars, the gods, and whatever was troubling Khemu's mind.[1] Following Khemu's murder in 49 BCE,[2] Bayek sought out and visited numerous stone circles throughout Egypt, as well as the Great Sphinx in Giza, as Khemu had wanted to do.[1] Years later in 38 BCE, Bayek found two more stone circles in Sinai, and reminisced about Khemu there as well.[3]

In the late 5th and early 6th centuries, the Irish saint Brendan of Clonfert traveled the British Isles[4][5] and to Vinland,[4] drawn to many standing stones due to his connection to the Isu Aita trying to find his "beloved". He left his musings at each monument, and centuries later, the 9th century Viking shieldmaiden Eivor Varinsdottir of the Raven Clan would also find these locations and the notes Brendan left there. Eivor later briefly travelled to Ireland,[6] where she saw examples of various standing stones.

The Stone Circles in Assassin's Creed: Origins seem to be based on archaeo-astronomical structures found at Nabta Playa in the Nubian Desert.

The Hathor Stone Circle and the Serqet Stone Circle in the game seem to have been accidentally switched, as one of the prayers to Serqet used by her cult states, "Serqet, Selqet, Selkit we perform these rites in the shadow of your stone circle. In the caves beneath your stars."[7] However, the cave near the House of Serqet is actually under the Hathor Stone Circle. 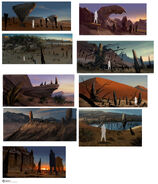 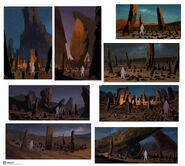 Concept art of a stone circle