Assassin's Creed Wiki
Register
Don't have an account?
Sign In
Advertisement
in: Articles in need of sources, Organizations, Police forces,
and 3 more

"The first Medjay was the protector of the pharaoh. But now, it means we must protect all the people of Egypt. Not just protect them, but work for their well-being."
―The Medjay, Bayek, to his son, Khemu, 49 BCE.[src]-[m]

The Medjay were an elite Egyptian paramilitary police force who served and acted as desert scouts and protectors of areas of Pharaonic interest throughout the Old, Middle, and New Kingdom periods of Egypt. The sworn guardians of the pharaoh and the nation, at their peak, the Medjay were highly esteemed and perceived as the very symbol of true honor, courage, and duty. For this reason, their badge was emblazoned with the Eye of Horus, an emblem representing the protection of the Egyptian people.

The Medjay were originally established during the Old Kingdom of Egypt and were tasked with the protection of the pharaoh's people. As the most trusted guards to the pharaoh, they were considered as the ultimate protector of the gods and the people.[1] A Medjay's duties extended into their wards' afterlives, as they were also entrusted with protecting mummification temples such as the Wabet of Memphis.[2] Their ranks were hereditary at least in part, for Medjay would pass on their duties from one son to the next. This created lineages whose family tradition revolved around serving as Medjay.[1][3]

By the time of the Ptolemaic dynasty, however, the Medjay had faded away, with only three Medjay left by 70 BCE: Emsaf of Hebenou, Hemon of Djerty and Sabu of Siwa. That year, the member of the Order of the Ancients Raia hired Bion to exterminate the bloodlines of the Medjay. After Bion had killed Emsaf and his family, Sabu met Hemon to warn him about the threat. Once Sabu left the city, Bion attacked and executed both Hemon and his son Sebestet. Unaware of this but determined to maintain the tradition even with so few members left, Sabu decided to train his son Bayek as a Medjay. Bayek would later pass his teachings onto his lover Aya of Alexandria.[3]

In 56 BCE, Aya unintentionally led Bion to their training camp. Sabu pushed his son in a river before being killed by Bion, and Aya fled to Siwa. In the city, she was captured by Bion, who uncovered she bore Bayek's child. Bayek arrived in Siwa and killed Bion, who revealed in his last breath the name of his benefactor. In Alexandria, Bayek killed Raia, ending the threat on the Medjay. Bayek married Aya who later gave birth to their son, Khemu.[3]

As the last Medjay, Bayek's duties largely revolved around him acting as a sheriff of sorts for Siwa. Aya also served as a Medjay. Despite their duties being largely taken over by the Phylakitai, Egyptians throughout the land still recognized the symbol of the Medjay, hailing Bayek as a "protector".[1]

In 48 BCE, Cleopatra appealed to Bayek's sense of duty by making him "Egypt's Medjay", granting him a golden badge to replace his original leather one.[4] Bayek's closest friend, Hepzefa, was also noted as a Medjay in Siwa, having taken on Bayek's duties after he left on his journey of vengeance against the Order of the Ancients[5] for their murder of Khemu the year before.[6] After Hepzefa's death, Bayek was again the last of the Medjay, a title he eventually discarded upon the foundation of the Hidden Ones.[7]

Prayer of The Medjay

"Every morning of my childhood, my father and I spoke the Prayer of the Medjay, a promise to those in need. 'I am a Medjay. I am a feather in the eagle's wing... a living dagger, plunged from the sky into the heart of chaos. I am a truth unknown... a scabbard unfilled... a son of the Nile... and a defender of the people. You cannot kill me, for I walk among the dead. Come forth by day, and I will guide you home.' My son should have learned this prayer from me."
―Bayek's thoughts on a Medjay's duties, 48 BCE[src]-[m]

Like the Assassins, who evolved as a direct result of the Medjay teachings, the Medjay had their own guiding principles that dictated their way of life. Like the Creed of the Assassins, the Prayer of the Medjay was passed down orally; Bayek reminisced about it and his own childhood, while watching over a protective ritual performed by Taimhotep and her maidservant Mara for Taimhotep's unborn child, and how he should have taught it to his son before Khemu's untimely death.[8]

Assassin's Creed: Origins is centered on the journey of Bayek as the last Medjay of Egypt in the last years of the Ptolemaic dynasty which ultimately culminates in his founding of the Assassin Brotherhood. Historically, there is no attestation for the Medjay's continued existence past the Twentieth Dynasty,[9] making this potentially anachronistic.

A crew skin named Medjays is available via the Helix Store for the ship Adrestia in Assassin's Creed: Odyssey. 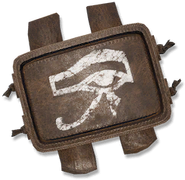 The simple Medjay Badge owned by Bayek and Hepzefa 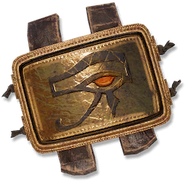 The ornate Medjay Badge given to Bayek by Cleopatra

The different badges on top of a map