Matthew Davenport was a British Army officer and a Templar during the American Revolutionary War.

As he was cold and calculating, Matthew served in his role fiercely, and was extremely loyal to his men, fighting with equal skill to that of his fine strategizing. Knowing that his daughter, Eleanor Mallow, joined him in the fight against the Assassins, he conducted Templar-related missions for her, those of the most sensitive caliber.

In 2012, his genetic memories were used as an Animi Avatar by the entertainment branch of the Templar company Abstergo Industries, to influence the general public via the Animus games console, under the title of the Commander. 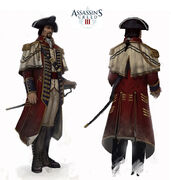 Retrieved from "https://assassinscreed.fandom.com/wiki/Matthew_Davenport?oldid=791107"
Community content is available under CC-BY-SA unless otherwise noted.