Niccolò: "Artifacts?"
Altaïr: "Of a kind. They are keys, each one imbued with a message."
—Niccolò Polo and Altaïr Ibn-La'Ahad on the Masyaf Keys, 1257.[src]-[m]

The Masyaf Keys, also referred to as the seals or keys of Altaïr, were a collection of five Isu Memory Seals containing information and memories from the Mentor of the Levantine Assassins, Altaïr Ibn-La'Ahad.

When brought together, the keys would grant access to the library of Altaïr Ibn-La'Ahad, beneath the fortress of Masyaf,[1] which, during the early 16th century, was desired by both the Assassins and the Templars.[2]

Following the death of his wife and youngest son, and his deposition at the hands of Abbas Sofian, Altaïr entered into exile in the Assassin fortress of Alamut. During this time, Altaïr was directed to six Memory Seals by the Apple of Eden that he had in his possession; he retrieved these artifacts and hid them.[1]

Altaïr's research discovered that the seals contained messages, though he did not know to whom they were intended.[1] He would later imbue the six seals with his own memories, and make use of five of them as the keys of his library.[2]

In 1257, while Masyaf was besieged by the advancing Mongol Empire, Altaïr passed the five keys and his codex to his guests, the merchants–turned–Assassins Niccolò and Maffeo Polo, who promised to hide them. They then escaped from the Mongols with the help of Altaïr's son Darim and safely arrived in the city of Constantinople, where they hid the keys and founded an Assassins Guild, though they lost Altaïr's Codex to the Mongol Empire along the way.[1]

In 1509, Ezio Auditore da Firenze, Mentor of the Italian Assassins, learned of the existence of Altaïr's library and the keys after reading a document left behind by his late father, Giovanni. Curious and driven by a desire to obtain answers about his Order, Ezio left Rome for Masyaf in 1510.[2]

Ezio arrived in Masyaf in early 1511, but was soon captured by the Templar Leandros, who captained of a group of Byzantine remnant soliders occupying the delapidated fort. After a long struggle, Ezio was able to escape and eventually kill Leandros, at which point he obtained Niccolò Polo's journal–containing further information on the keys–which had been in Leandros' possession.[2]

Following this, Ezio journeyed to Constantinople and started his search for the keys, eventually finding one underneath Niccolò Polo's old trading post. By that point, however, the trading post was inhabited by the Venetian bookseller Sofia Sartor; with her assistance, Ezio was able to decode a map showing the locations of all the keys in Constantinople.[2]

With every key that Ezio found, he found himself reliving a significant moment in Altaïr's life, of which the Syrian Assassin had encoded onto the key during his own lifetime. In time, Ezio recovered all five keys, including the one that the Templars had in their possession, and returned to Masyaf in order to open the library.[2]

Inside, Ezio found no books or weapons as he and his Templar enemies had believed they would, but the skeleton of Altaïr alone, holding his sixth and final seal. This showed him the final moments of Altaïr's life, and revealed that Ezio's Apple and Altaïr's own were not one and the same, as he had previously believed.[2]

Thus, ending his journey, Ezio stripped himself of his battle gear and Hidden Blades, renouncing his life as an Assassin. Ezio and Sofia then returned to Constantinople in order to hide the seals in the chamber beneath Sofia's former bookshop, within the Yerebatan Cistern, and under the protection of the city's Assassins. 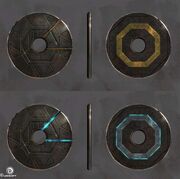 Concept art of the keys by Martin Deschambault

Ezio holding one of the Masyaf Keys

The Masyaf Keys in the Galata headquarters

Ezio reliving the memory stored within one of the keys

Ezio and Yusuf gazing at a Masyaf Key

Ezio with the final Masyaf Key

Ezio packing the keys up for the exchange