The title of Master Assassin is one of the highest attainable ranks within the Assassin Order, and those who hold this title are presumed to have reached the peak of their training as an Assassin. The rank garners a large amount of respect from other members within the Order and indicates individuals who possess uncommon skill and talent, most often in the arts of stealth and assassination.

A Master Assassin is meant to embody the Creed: they have never harmed an innocent, always hid in plain sight, and never compromised the Brotherhood.

In 1176, Umar Ibn-La'Ahad and his fellow Assassin Faheem Al-Sayf held the title of Master Assassin within the Levantine Brotherhood. However, Umar gave his life to spare the Brotherhood from a siege, in retribution for an assassination gone wrong.[1]

In 1191, Altaïr Ibn-La'Ahad held the position, before being demoted to a novice following his failure to obtain the Apple of Eden beneath Solomon's Temple, along with his arrogance and disregard of the tenets of the Creed. He eventually regained this title through several assassinations in support of the Order's interests, and held it during the assassinations of Robert de Sablé and Al Mualim.[2] Eventually he became Mentor of the Levantine Brotherhood.[3]

In 1492, Aguilar de Nerha and María held the position within the Spanish Brotherhood. Aguilar would later assume the mantle of Mentor[4] after Benedicto's death in the same year.[5]

In 1500, Ezio Auditore da Firenze obtained the rank, before rising to be the Mentor of the Italian Brotherhood, following the liberation of Rome from the House of Borgia's grasp.[6] During the 16th century, both Yusuf Tazim, the leader of the Ottoman Brotherhood, and Piri Reis, the famed Ottoman cartographer and bomb specialist, were Master Assassins, as were two of Yusuf's lieutenants, Dogan and Kasim.[3]

In the 18th century, Achilles Davenport was a Master Assassin and later Mentor of the Colonial Brotherhood. Following the near complete collapse of the branch in 1763, Achilles removed himself from the Assassin affairs, but eventually returned to prominence as the Mentor of the Assassin Ratonhnhaké:ton.[7] Ratonhnhaké:ton himself obtained the rank at some point later in his life.[8]

During the period between the 19th and 20th centuries, Nikolai Orelov, a member of the Narodnaya Volya sect of the Russian Brotherhood, was a Master Assassin.[10]

By 2015, the latest Assassin known to have held the position was Galina Voronina of the Russian Brotherhood.[11]

Like other Assassins of the Levantine Brotherhood, most Master Assassins possessed the eagle beak-like design upon their hoods, but their robes were generally longer, forming a bird-like "tail" that fluttered whenever they were in an area of strong wind. In addition, their leather belts were larger, their red sashes wider and longer, and they had permission to carry any weapon they desired.[2]

When the order retreated underground after the Levantine Brotherhood's supposed collapse, a uniform guideline as to the attire of a Master Assassin no longer existed. The Master Assassins of the Renaissance in Europe were a small, underground group with broader access to knowledge and weapons. Most retained their freerunning, Hidden Blades and hooded traditions, though Master Assassins were the only ones permitted to wield dual Hidden Blades. [12]

As Assassin Dens were erected within Constantinople, Ezio Auditore promoted several high-ranking Assassins to be Master Assassins who guarded the structures. These new Master Assassins would be trained specially by Ezio to be able to fulfill their role, and this extra training allowed them to hold the Dens against Templar attacks.[3] 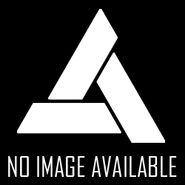 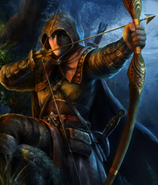 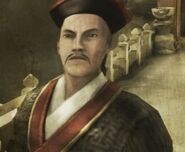 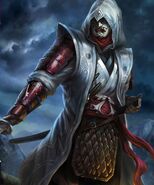