The Marquis (harvested from: Charles de la Motte) was an Animi Avatar used by Abstergo Industries to train the recruits in the first stage of their Animi Training Program. He was available after a system update, and wielded a sabre as his weapon of choice.

The Marquis had several unique moves:

The Marquis walks over to his target and rapidly slashes them across the chest in a downwards motion, moving along with his blade, before bringing his sword back around for another attack. Slashing upwards from their waist, towards their neck, the Marquis sends his victim flipping backwards to their death.

The Marquis approaches his target from behind, before brutally wedging his sword in the back of their neck. He then frees his sabre by easing his dead victim's head off of his sword, through pushing them from the end of the blade with his hand.

The Marquis runs over to his target and withdraws his sabre, before he chops down rapidly into their shoulder. With the momentum, it forces them to kneel, so he takes the opportunity to free his blade by brutally kneeing his victim in the face, sending them falling backwards to die as he sheathes his weapon in its scabbard.

The Marquis rushes to his target and draws his sword, before he slashes upwards along their back and wedges his sabre into their side, severing their spine in the process. He then kicks his victim's legs from underneath them and spins as he frees his blade, before sheathing away his sabre.

The Marquis draws his sabre and slashes his seated target across the torso, before holding their shoulder and forcefully stabbing them in the chest. He impales them halfway to the blade's hilt, with the point of the blade being visible from out of his victim's back, before the Marquis brutally pulls it free and stores his sword away.

The Marquis leaps from a rooftop and lands on his target, forcing them to the ground. He then unsheathes his sabre and plunges it into their neck, killing them instantly, before withdrawing it from his victim's dead body and replacing it in its scabbard as he stands up.

The Marquis could be customized in several ways: 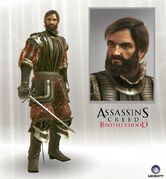 Digital render of the Marquis

Concept art of the Marquis, by Rémi Farjaud

The Marquis being killed by a Pariah

A team of Marquises attempting to kill a VIP

The Marquis killing the Pariah

The Marquis being killed by the Dama Rossa