Marcus Junius Brutus (85 BCE – 42 BCE), known simply as Brutus, was a politician of the late Roman Republic, and one of the earliest members of the Hidden Ones, which would later transform into the Assassin Brotherhood.

Most notably, Brutus held a leading role in the assassination conspiracy against the consul Gaius Julius Caesar in 44 BCE. He was also the first known human to discover the Colosseum Vault.

Sometime prior to 45 BCE, Brutus became a member of the Roman Senate. In 47 BCE, he and fellow senator Gaius Cassius Longinus became two of the first members of the Hidden Ones, an earlier incarnation of the Assassins, after having been recruited by Aya. Both of them later met up with Aya in Alexandria, where they made preparations to head to Rome and combat the Order of the Ancients there. When Aya's fleet was attacked by Roman ships, Brutus and Cassius helped to assist her before making their journey to Rome.[1]

Around 45 BCE, many senators began to fear Caesar's growing power following his appointment as dictator.[2] Aware of Caesar's connection to the Order of the Ancients, the Hidden Ones[3] began leading a conspiracy against Caesar, recruiting forty senators and called themselves the Liberatores.[4]

Discovery of the Vault

"Dreams of the cavern again! I run my phantom hands along its walls and recognize every flaw. There is writing here, but I cannot read it."
―Brutus speaks of his dreams.[src]-[m]

For some time, Brutus' dreams were haunted by a mysterious cavern that he found himself compelled to find. Eventually, he was led to discover the sealed First Civilization vault hidden beneath what would eventually become the Santa Maria Aracoeli.[4]

As he had been assigned by Gaius Cassius Longinus as the one to come up with the plan of assassinating Caesar, Brutus designated a Temple of Juno preceding as sealed Isu Vault as a meeting place for his co-conspirators.[5][4]

Whenever his fellow Assassins left after their council meetings, Brutus would explore the cavern on his own, coming across what had supposedly drawn him to the location, "Whispers. Lights flickering through cracks in the earth. A doorway that is also a puzzle."[5][2]

Eventually discovering how to gain entrance to the vault, Brutus was struck to awe by "phantom radiance" of the otherworldly architecture, and found the "very pillars of [his] beliefs toppled." Upon approaching and activating the vault's pedestal, Brutus was shown Rome in flames; the aftermath of Caesar's assassination, which ultimately drove him into action.[6]

Brutus would later write several scrolls describing his dreams and discovery of the vault, as well as include drawings of the chamber and its pedestal. Following the assassination of Caesar, Brutus also returned to the temple to store these scrolls, as well as his heirloom armor.[7]

"I relay my plan; some details are my own, but others driven by my visions. My contributions are practical: we will attack as a group to prevent escape and to ensure each of us is committed to this task. We will lure him to the Senate, where none of his allies may enter."
―Brutus planning Caesar's assassination.[src]-[m]

In 44 BCE, Brutus brought Aya around Rome to explore the city and the surrounding. Along the way on the rooftops, they tracked down a Roman orator, Magnus, who supported Caesar's ascension and attempted to manipulate the Senate. Brutus instructed Aya to assassinate Magnus at the right time, which she did with an arrow soon after.[3]

After assassinating the orator, Brutus and Aya regrouped in a Roman bathhouse, where he reminisce about his past with Caesar, whom he believed had became mad with power. They were later interrupted by Cassius, who informed them that Caesar refused to renounce the title of dictator, despite the "messages" they had sent.[3]

Inspired and encouraged by the visions he had seen in the vault, Brutus devised the plan for the assassination alongside thirty-nine other senators.[5] As dictated to him by his visions, Brutus scheduled their attack for the Ides of March.[8][3]

That day, however, Caesar's wife, Calpurnia attempted to convince him not to attend the Senate, delaying his arrival and leading the Hidden Ones to fear that the plot had been found out.[3] Brutus persisted nevertheless, arriving at the Theatre of Pompey with Aya and Cassius, where the caught sight of Caesar with Lucius Septimius by his side. While Aya dealt with Septimius, Brutus and Cassius were instructed to delay and wait for Caesar at the Senate. Upon Septimius' defeat and death, Brutus met with Aya outside the Senate, where he handed her a dagger given to him by Caesar, appointing her as the one to eliminate Caesar. Brutus later entered the building and attended the Senate with the rest of the senators. Following Brutus' instructions, Aya entered shortly after and delivered the first stab to Caesar.[9][3]

The rest of senators then followed, stabbing Caesar twenty-three times. Caesar resisted at first, but resigned himself to his fate upon recognizing Brutus, who delivered the last stab to Caesar, killing him. With Caesar dead, Brutus declared that Romans were now free from the tyrant.[9][3]

"I can think of no one better to fix this place. You can start a new bureau here. Do it the right way. From the shadows. It is your home now."
―Brutus entrusting Aya to lead the Hidden Ones in Rome.[src]-[m]

After the assassination, the Senate passed an amnesty on the Hidden Ones, which was proposed by Caesar's friend and co-consul Marc Antony. Nonetheless, uproar among the population caused Brutus and the other Hidden Ones to go into hiding. After Aya was knocked unconscious during a fight on an aqueduct, Brutus and his follower ones found and brought her to safety in a aqueduct supply storeroom. Aya, having seen the repercussions' of the assassination, questioned Brutus' decision to assassinate Casesar in the Senate, pointing a knife to his neck. Cassius managed to interlude, convincing them to quickly leave Rome before Caesar's loyal followers find them.[10]

As Brutus and the Hidden Ones continued their path on leaving Rome, they came across a senator who took part in Caesar's assassination, being surrounded by the Roman citizens. Aya urged Brutus and the rest to continue and head to Crete before heading to save the senator. However, Brutus and Cassius refused to leave Aya to their deaths and later saved Aya from being eaten by a hippopotamus in an underground cavern. Setting fire to delay the pursuers, Brutus and the Hidden Ones made their way through an exit, only to be confronted by Artonius and a group of Caesar's followers.[11]

The Hidden Ones fought their way through the guards, eventually overwhelming them and Antonius. Before Brutus could eliminate Antonius, Aya stopped him, suggesting to end further bloodshed. With the uproar slowly dying down, Brutus met with Aya one last time on an aqueduct, entrusting Aya to lead the Hidden Ones in Rome. Brutus was given a dagger by Aya to use in his journey and promised to one day return to Rome.[12]

Sailing to Crete, Brutus established a local branch of the Hidden Ones on the island and worked to eliminate the tyrants on the island like he did in Rome. However, he was soon drawn back into conflict with Antonius, who now worked with Caesar's heir Octavian to bring down the Liberators.[12]

"Whatever power lies within this artifact, it has not returned our Brother to us. We close his eyes again. There is no sign that he had ever moved."
―The attempted resurrection of Brutus.[src]-[m]

Eventually, the armies of Antonius and Octavian clashed with those of Brutus and Cassius at the Battle of Philippi in Macedonia in 42 BCE. Faced with certain defeat, the two Hidden Ones fled and committed suicide.[12]

After Brutus' death, his followers gathered in Philippi and tried to use the Shroud of Eden to bring him back. However, the Shroud was not capable of such restoration, and though Brutus opened his eyes and moved, he did not appear to breathe, and eventually fell still in a seeming second death.[13]

Not long after Brutus' demise, rumors circulated that he may have survived by faking his death and changing his name.[12]

In 1320, the author Dante Alighieri included Brutus and Cassius in his poem Inferno, the first part in his Divine Comedy. In it, they were condemned to the lowest circle of hell for killing Julius Caesar, despite the fact that Dante was also an Assassin himself.[14]

Some time prior to 1500, the Followers of Romulus discovered the temple, and found Brutus' armor and dagger within. They took the artifacts, hiding them in a chamber in the tunnels beneath Colle Palatino. The chamber was to only be opened with six keys, spread across various landmarks throughout Rome, hidden alongside the scroll Brutus had written.[7]

In 1503, Giovanni Borgia relived some of Brutus' memories, due to them both having been exposed to the Shroud of Eden. Later that same year, the Italian Assassin Ezio Auditore managed to obtain all six keys and retrieved Brutus' armor and the dagger from its chamber.[15]

By the year 2000, a marble bust of Brutus' head was located in the Mentor's office in Dubai, alongside statues of Iltani and Ezio Auditore.[16]

Brutus belonged to one of the oldest patrician families in Rome, Junius, long-time members of Roman aristocracy who believed they were direct descendants of the Roman goddess Juno, the wife of Jupiter. Somewhat fittingly, Brutus' ability to activate the vault pedestal suggests he was a descendant of the First Civilization.

Brutus with Aya and Cassius 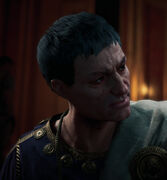 Close-up of Brutus as he appears in Assassin's Creed: Origins