Assassin's Creed Wiki
Register
Don't have an account?
Sign In
Advertisement
in: Articles that need updating, 1492 deaths, Individuals,
and 5 more

"I would gladly sacrifice my flesh and my blood so that the Creed may live."
―María reciting her initiation vows with Aguilar, 1492.[src]

María (died 1492) was a Master Assassin of the Spanish Brotherhood during the 15th century, as well as a lover and close ally of fellow Assassin Aguilar de Nerha.

In 1492, she and her fellow Assassins sought to prevent Prince Ahmed of Granada from being captured by the Templars, fearing that his father, Sultan Muhammad XII of Granada, would relinquish the Apple of Eden in his possession in exchange for his son's safety.

Little is known of María's early years beyond the fact that she was half-Moorish and that she was born to Assassins, who gave her a pendant in the shape of an eight-pointed star, with the Assassin insignia etched into it. Much like her parents, she ended up joining the Brotherhood and became fiercely devoted to its ideals.[1]

At some point, Aguilar de Nerha, having lost his parents to Tomás de Torquemada's Spanish Inquisition, came to the Brotherhood and asked for training. Although many doubted his motives, María and her Mentor Benedicto believed he could become a true Assassin. They reached out to Aguilar and helped him work through his grief and anger.[1]

Afterwards, María and Aguilar began training together and gradually grew closer, eventually entering into a relationship.[1] In 1492, María attended Aguilar's official induction into the Brotherhood, during which his ring finger was ritually amputated. She then presented him with his Hidden Blades, while reciting the Creed.[2]

"Our mission is the boy [...] The Templars may not find his hiding place, but if they do, they'll trade his life for the Apple. Sultan Muhammad will have no choice."
―Benedicto informing the Assassins of their mission, 1492.[src]

A few months later,[1] María joined her Mentor, Aguilar and several other experienced Assassins on a mission to prevent the capture of Prince Ahmed of Granada. However, the Templars managed to find the prince, who had been hidden in a remote village, and had him put in a cage. As General Ramirez, the leader of the company of Spanish soldiers, held a grand speech in front of the town's inhabitants, María and her compatriots blended into the crowd.[2]

Ramires was subsequently struck down by Aguilar, following which the Assassins commenced their attack; María, keeping the mission's objective foremost in her mind, headed straight for the cart that held the prince. After dispatching a guard, she jumped onto the wagon and rode off, but was quickly pursued by Ojeda and his men. Switching between steering the cart and protecting it from attackers, María was able to keep the Templars at bay for some time, even as Ojeda continued to come closer.[2]

Eventually, a persistent soldier managed to unbalance María from her seat, causing her to fall between the horses, though she managed to hold onto their harness. Aguilar came to her rescue, taking out the Templar, but saw that the wagon, having had no one to steer it, was headed straight for a cliff.[2]

Although María disconnected the harness from the cart, causing the horses to veer away from the chasm, the cart nevertheless went over the edge, with her partner and the prince still inside it. Aguilar managed to save their lives through the use of the grappling hook built into his gauntlet, but he and Ahmed were still apprehended by Ojeda.[2] María herself was also captured and imprisoned in Seville alongside Aguilar and Benedicto, the only members of the Brotherhood who had survived the rescue attempt.[1]

Aguilar: "Sultan Muhammad is weak. He'll surrender the Apple and betray the Creed for the prince's life. He loves his son."
María: "Love makes us weak."
—María and Aguilar during their imprisonment, 1492.[src]

While in the holding area, María and Aguilar spoke of the Sultan's attachment to his son and repeated the vows they had made during their initiation: to sacrifice themselves and those they loved if it ensured the Creed's survival. Shortly thereafter, the Assassins were dragged out of their cell and led to an open platform, where they were to be publicly executed as heretics. As Master Templar Tomás de Torquemada addressed the crowd, María and Aguilar were chained to a stake, while Benedicto was chained to another.[2]

Ojeda then lit the pyre, burning the Mentor alive; at the same time, Aguilar managed to break free of the shackles securing his feet to the stake. After seizing a sword from a nearby guard, he cut at the chains around María's feet, freeing up her legs so she could defend herself. However, as her arms were still secured to the stake, keeping her trapped there, one of the soldiers threw his torch in an attempt to light the pyre.[2]

In response, Aguilar launched himself at the stake and toppled it, sending María to the ground. An executioner then prepared to strike her with an axe, but she was pulled out of the weapon's path by Aguilar. Instead, the axe severed the chains around her arms, setting her free. Together with her partner, María fought off the guards and subsequently fled the scene.[2]

While the Assassins fought their way through Templar soldiers on the rooftops, Ojeda doggedly chased after them on horseback. With their pursuers turning to crossbows, María and Aguilar briefly sought refuge inside a church, before rushing outside again and freerunning across ropes. Unable to shake the black knight, the Assassins decided to ascend the Seville Cathedral, from which they performed Leaps of faith into the city below to escape.[2]

Confrontation at the Alhambra

"Our own lives mean nothing. What matters is what we leave behind."
―María to Aguilar before their attempt to retrieve the Apple, 1492.[src]

Afterwards, the pair traveled to the Alhambra in Granada, where they witnessed the arrival of Torquemada and his forces. Using what little time they had left before the Master Templar's meeting with Sultan Muhammad, María gave Aguilar the necklace she had received from her parents many years ago. She and her partner then lay in wait as Torquemada convinced Muhammad to hand over the Apple in exchange for his son's life.[2]

With the artifact in his hands, a mesmerized Torquemada launched into a grand speech, causing Ojeda and the other Templars to kneel in reverence. Seizing this moment, Aguilar threw two smoke bombs into the palace vault room, before dropping down into the chamber. Simultaneously, María leapt down into the courtyard, where she assassinated two soldiers, following which she ran into the room and locked it from the inside.[2]

Using the smoke as cover, the Assassins were able to take out the remaining guards. However, just as Aguilar caught Torquemada and procured the Apple, María was seized by Ojeda, who put a dagger to her throat. Seeing her partner hesitate in killing Torquemada, María reminded him of their oath, of their duty to secure the artifact even at the cost of loved ones. But Aguilar refused to sacrifice her and retracted his Hidden Blade, prompting María to plunge Ojeda's blade into her own neck to remove herself from the equation.[2]

As María fell to the ground, Aguilar launched himself at Ojeda, ferociously attacking the Templar, but he was eventually overcome and landed next to his partner, whose life was steadily ebbing away. With her last breath, she tried to remind Aguilar of her Hidden Blade. Remembering its function, Aguilar aimed her gauntlet and pressed the release, firing the blade straight into Ojeda's chest. This provided the Assassin with the opportunity to finish him and subsequently escape with the Apple.[1][2]

While she was a more measured individual than her partner-in-arms, María shared Aguilar's dedication to the Brotherhood and sought to prevent the damage Templar influence was doing to her country.[2]

Light on her feet and exceedingly quick, María was both a highly-skilled freerunner and combatant in her own right. She wielded two Hidden Blades, each comprised of two thin blades next to one another.[2] One of her blades also featured an attachment that allowed her to shoot a small, arrow-like projectile.[1] She also possessed a dagger, a bone crossbow, and a parrying shield, a wrist mounted portable shield with the capability of snapping an enemy's sword when entrapped.[3]

María wore robes bearing Moorish influence,[2] specifically Berber. Like most Spanish Assassins, her robes were divided into four at the waist allowing for more dynamic movements. Her hood was a fine woven blue-grey fabric that shaped into a wing. Her chest piece was wrought from gold silk, with layers of water beads and tiger-eyes made to resemble a tribal necklace.[3]

Alicia Vikander was originally considered for the role of María, but scheduling conflicts with Jason Bourne eventually caused the actress to drop out, with Ariane Labed being cast instead.[4]

María, like some other characters, is not named throughout the movie, barring the credits.

In a deleted scene (and thus non-canon) from Assassin's Creed, it is revealed that she is the ancestor of an Assassin named Lara. 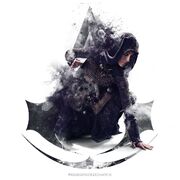 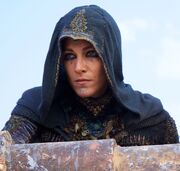