"Cesare wants me to meet his murderous doctor, Malfatto, though I do not believe he really is a doctor. He is a predator of women. A monster."
―Fiora Cavazza.[src]

Malfatto (died 1502) was a member of the Templar Order, and a doctor notorious for killing courtesans.

In 2012, his genetic memories were used as an Animi Avatar by the Templar company Abstergo Industries, in the first stage of training for their Animus recruits, under the title of the Doctor.

"I spot her! She looks like a broken doll at first, discarded in the alley. Then I see the blood. So much blood!"
―Fiora discovering one of Malfatto's victims.[src]

Malfatto was an infamous serial killer of courtesans in Rome, and he was feared enough to catch the eye of Cesare Borgia, who wished to recruit Malfatto into his personal army.

In 1502, Cesare sent his envoy, Fiora Cavazza, to deliver a letter of absolution to Malfatto, in the hopes of gaining his allegiance. Having worked as a courtesan before being employed by Cesare, Fiora was particularly fearful of finding Malfatto, but nonetheless obeyed.

On her first attempt to search for him, Fiora wandered through the poor district of the city, but instead of finding Malfatto, she heard the sounds of a woman sobbing and pleading for her life. Running towards the sound to find the victim, Fiora unfortunately arrived too late, and could only flee in fear from the terrible, bloody sight of Malfatto's latest kill.

Subsequent to this, Fiora began refusing Cesare's orders to find the doctor, though she was forced to comply when he threatened to have her killed. Dressed in one of her old courtesan outfits to lure Malfatto out, Fiora only narrowly escaped being attacked when she finally discovered him.

The doctor paused only when Fiora yelled Cesare's name at him and held out the letter she had been tasked to deliver. Malfatto took it wordlessly, but did not read it, and he simply watched the courtesan eerily as she backed away from him and left.[1]

"I cannot see his face, but Malfatto's posture betrays fear! Have his victims ever fought back?"
―Fiora drawing her weapon against Malfatto.[src]

Fiora safely returned home, unaware of the fact that Malfatto had followed her. While the former courtesan slept, Malfatto injected her with his syringe, but the prick of the needle caused her to wake up.

Panicking, Fiora grabbed her bladed fan to defend herself, much to Malfatto's shock. Despite being disoriented from the poison Malfatto had injected, she managed to wound the doctor severely, before falling unconscious.

As he was bleeding badly from his injury, Malfatto swiftly left through the window, without finishing his kill.[1]

Ezio: "Who did this?"
Courtesan: "That monster, Malfatto!"
—Ezio coming across Malfatto's latest kill.[src]

Sometime after his encounter with Fiora, Malfatto, then under Cesare's employment, hunted in the area near to the Tiber river, where he would soon claim his next victim, a courtesan named Mina. Mina's friend found her, and as she cried over her corpse, the Assassin Ezio Auditore da Firenze happened upon the bloody scene.

Ezio offered to help, after which the courtesan directed him to track Malfatto down and make him pay. The Assassin searched through the district, following the directions of several courtesans he passed, who pointed him in the right direction.

Finally, Ezio found Malfatto standing by a medical stall, but the murderer fled, with Ezio in close pursuit. After a brief chase, Ezio sent his Assassin recruits in for the kill. As Malfatto lay dead, Ezio held a hand over his mask and offered him his last rites.[2] 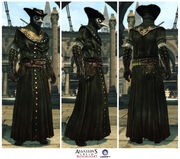 Malfatto in an alleyway in Rome