Makarios was the younger son of Xanthe and Serios, who lived in Pitana, Lakonia during the 5th century BCE.

During the Peloponnesian War Makarios was to begin his agoge. When his mother saw the misthios Kassandra, Xanthe asked her to escort Makarios to the Agoge Camp North. Kassandra did as asked, learning about Xanthe's other son, Theoros, while on the way there.[1]

At the camp they met the agoge trainer Iatrokles, who asked if Kassandra would see what had happened to Theoros and another student, Akamas, who had disappeared from their overnight camp. While Makarios trained, Kassandra left the camp.[2] 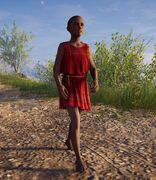 Makarios on his way to the camp

Makarios at the Agoge Camp

Theoros and Makarios rejoined
Add a photo to this gallery

Retrieved from "https://assassinscreed.fandom.com/wiki/Makarios?oldid=796219"
Community content is available under CC-BY-SA unless otherwise noted.