"Of course not! I killed them because I could, because it was fun! Do you know what it feels like, to determine another man's fate? And did you see the way the people cheered? The way they feared me? I was like a God! You'd have done the same if you could. Such power!"
―Majd Addin.[src]

Majd Addin (died 1191) was a Saracen regent of Jerusalem and a member of the Levantine Templars. He was the sixth individual to be assassinated by the Assassin Altaïr Ibn-La'Ahad and, like his Templar brothers, his death was planned by Al Mualim. Majd Addin was located in Jerusalem's Poor District.

"Ṣalāḥ ad-Dīn's absence left the city without a proper leader and Majd Addin has appointed himself to play the role."
―Malik describing Majd's power.[src]

Majd Addin was once a simple scribe.[1] At some point in his life, not only did he become a member of the Templar Order, but he also became aware of an Apple of Eden and its capabilities; Addin and nine other individuals closely guarded its secrets and intended to use the Apple to create a new world.[2]

Due to his membership of the Order, and the absence of the Sultan Salāḥ ad-Dīn, Majd Addin was able to take control of Jerusalem. Addin believed that everyone should view the world in his way, and those that did not oblige to this were sentenced to death. He used fear and intimidation to keep the population of Jerusalem in check, often issuing strict and confusing edicts regarding the way people should conduct themselves. This way, he was slowly reversing Ṣalāḥ ad-Dīn's long-standing policy of tolerance toward all races, religions, and creeds.[3]

Mock trials were often held for those he perceived to be enemies of the city. In these, he would either frame them or exaggerate their crimes, in order to make sure the trials would always result in death, as well as the public's disapproval of the sentenced – this caused the people of Jerusalem to call the trials "executions" instead. Through these executions, Addin silenced anyone who would oppose him, and struck fear into the hearts of any who considered an uprising.[4]

He was known to speak with an authoritative edge and insisted that he knew what was best for the people of Jerusalem. However, Majd was a cruel man and his citizens knew he could not be trusted.[5]

"Not so innocent. Dissident voices cut deep as steel. They disrupt order. In this, I do agree with the Brotherhood."
―Majd about the people he attempted to execute.[src]-[m]

Altaïr traveled to Jerusalem's Poor District, where he started his investigation of Majd Addin. He soon discovered that there was to be another execution, and that a group of citizens were planning to stand up against Majd Addin in order to save the son of their leader.[4]

During the public execution, Majd judged an alleged prostitute, a thief, a gambler and a heretic. The heretic was in fact an Assassin, and Malik Al-Sayf had tasked Altaïr with killing Majd before the Assassin was executed. The citizens who had planned to stand up to Majd tried in vain to stop the execution, but they were quickly killed by archers and other guards.[5]

Majd began his speech about the prostitute, declaring that she had sold her body to several men. She defended herself by stating that she was only there because she had refused to lie with Addin. He then killed the woman, saying that even when she was only moments from her death, she still continued to lie.[5]

The second victim was the gambler, who remarked that he had only played a game of chance, further saying it was not sin that corrupted the city, but Addin. Majd then killed him wordlessly and moved on to his next victim.[5]

The third victim was being accused of stealing the gain of others. To acquire support from the public, Majd convinced the crowd that everyone had been violated by his actions. The man tried to defend himself, saying that he had picked only one dinar which had fallen to the floor. However, Majd Addin rebuked that the crime would rise and begin to affect others more directly, after which he killed the man.[5]

Before Majd could move on to the Assassin, Altaïr made his way to the stage and stabbed Majd with his Hidden Blade, allowing Malik's other Assassins to save their imprisoned brother.[5]

During Majd's dying moments, he told Altaïr the reason for his evil deeds, commenting that, while he joined the Templars to help them take control of Jerusalem, in fact, he simply wanted the power and fear such a position granted. He stated his belief that Altaïr would have done the same, which the Assassin denied, and finished him with a second stab with the Hidden Blade. Afterwards, Altaïr smeared the feather he had brought with Addin's blood, and reported back to the Assassin bureau.[5]

Majd Addin was later buried in a cemetery in Jerusalem, where both Saracen and Crusader soldiers joined together to pay their respects. Altaïr was also present, as he had discovered that his next target, Robert de Sablé, would also be present; while there, he noted that there was very little conviction behind the wails and prayers of sorrow from the assembled nobles. However, the funeral turned out to be an ambush as Robert had not planned to attend, knowing that the Assassin would strike, so he sent a decoy instead.[6]

"Fear and intimidation get him what he wants."
―Malik on Majd.[src]

Majd Addin was an egotistical and power-hungry individual who thrived off of the fear that people had for him. It was this lust for power that led him to become a member of the Knights Templar, who offered him what he desired in exchange for his allegiance.[2]

Addin often conducted executions because he felt that determining another man's fate gave him a god-like status. A very proficient speaker, Majd Addin could manipulate the crowd with his words, often making them blindly believe that the executions he carried out were for the good of the city.[5]

Dying, Majd Addin did not claim that what he did was right, instead confessing that he did it not to help his brethren, but because he enjoyed it, as well as to gain power and fame, which he accomplished over time. However, this led to his downfall as he had allowed these factors to corrupt him.[5] 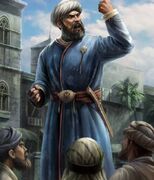 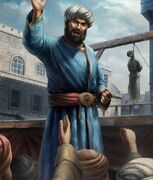 Memories art of Majd Addin at a hanging 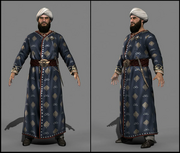 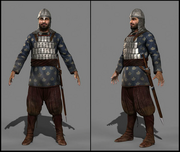 Majd Addin arriving at the execution