Macau (澳門), formerly known as Haojiang (濠冮),[1] is a city-state and autonomous territory on the southeastern coast of China. A major resort city, it lies on the west end of the Pearl River Delta across from Hong Kong, China's other city-state. It was a former colony of Portugal from 1557 to 1999, constituting the last European colony in Asia.

As the site of Portuguese incursions during the 16th century, it became a significant port for the global slave trade. Under the Ming dynasty, it also hosted the stronghold of the Templar slaver Yu Dayong. His assassination at the hands of the Assassin Shao Jun in 1526 led to the Templars venting their fury on Macau by setting it ablaze, although it would continue to prosper for centuries after.

In 1513, Portuguese explorer Jorge Álvares became the first of his people to arrive in China. Landing in what is now Macau, he laid the foundations for the area to become the main Portuguese access point into China.[2] As a port town, it became a major site for the Portuguese slave trade.[3]

In 1526, the city fortress was commanded by Yu Dayong, a Templar and one of the eunuchs known as the Eight Tigers. There, he prodigiously oversaw the slave trade, but the vengeful Assassin Shao Jun infiltrated the stronghold one night and assassinated the Templar.[4] As the Assassin made her escape, Yu's corpse was quickly discovered by Qiu Ju, another Tiger and one known for his brutality. In retaliation and in hopes of afflicting Shao with guilt, he ordered his men to set the port ablaze, killing many innocents in the process.[5] 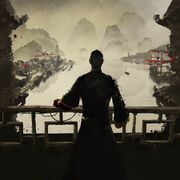 A collapsing structure due to the fire, 1526.