"You have just shown me why we should not be under one rule."
―Mōri Motonari.[src]

A daimyo of what was a relatively small clan, Motonari used a cunning blend of tactics and force to expand his empire. Within a few years, he had eliminated several rival clans and ruled over the entire Chugoku province.

Motonari was also a vocal opponent of Nobunaga's attempt to unify all Japan, though he never had the strength to challenge Nobunaga directly. The Mōri clan was further weakened when Nobunaga arranged the assassination of Motonari's heir, Mōri Takamoto.

He was killed by Hattori Hanzō, an Assassin, in 1571, in order to pave the way for his lord Tokugawa Ieyasu's eventual takeover of Japan.

Motonari with his three sons 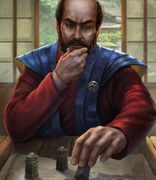 Motonari looking over a map