Churchill: "If you could put your considerable talents to good use at Tower Bridge, you would have the thanks of a brave, but beleaguered nation."
Lydia: "I would settle for the right to vote."
—Lydia to Churchill, 1916.[src]-[m]

Lydia Frye (born 1893) was a member of the British Brotherhood of Assassins, the wife of Sam Crowder and the granddaughter of Jacob Frye.

During World War I, Lydia operated in London, protecting the city from Templar machinations. At the request of Winston Churchill, she tracked down and eliminated a group of spies that were led by a Sage.

Born into relative comfort, Lydia was initially reluctant to join the Brotherhood like the rest of her family, choosing to focus on her studies instead. Through her education, she nevertheless realized the extent of the Templars' influence throughout the world. This, coupled with the loss of friends and family to the Assassin-Templar War, led Lydia to eventually accept her Assassin heritage and join the fight against the Templars.[1]

As her parents were frequently absent, engaged in missions for the Brotherhood abroad, Lydia turned to her grandfather and her grand-aunt, Evie Frye, for training. From them, she learned to analyze situations and plan accordingly, yet also stay flexible enough to improvise when things went awry.[1]

At some point, Lydia fell in love with fellow Assassin Sam Crowder, whom she married shortly before the outbreak of World War I. While her husband, like many British Assassins, eventually enlisted in the army, Lydia remained in London, in order to protect the city against German spies, and the British Rite of the Templar Order.[1]

In 1916, at the behest of Winston Churchill, Lydia infiltrated and eliminated a German Templar spy facility in Tower Bridge. She later sought out, on his request, the rest of the group and their Sage leader that he deemed to be a pressing matter of national security which he was unable to broach with the government as he lacked strong enough evidence. In exchange for her services, Churchill promised Lydia that he would do what he could for the enfranchisement of women when he had returned to parliament after the War.[2]

Lydia was equipped with the same model of Hidden Blade and the same arsenal that her mentors used nearly fifty years earlier. Specifically, she used a kukri identical to the one previously used by Jayadeep Mir as well as an M1877 "Lightning". Lydia possessed the skills of both her brawling grandfather and her stealthy great-aunt and like them, she possessed the rare trait of Eagle Vision. 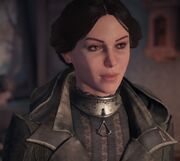