Ludovico Orsi (1455 – 1488) was a member of the Orsi family of Forlì, older brother to Checco, and a member of the Roman Rite of the Templar Order. Bored with their life in the countryside, the two began a loan-sharking business, where they murdered any who did not pay their debts.

The brothers were once hired by Caterina Sforza to kill her own husband Girolamo Riario, after finding out that he was a Templar. Riario, who was already in debt to the Orsi brothers, was stabbed to death by them during a meal, and his naked body was thrown out onto the town's central plaza.[1]

Battle of Forlì and death

"Sì, a certain Apple indeed. Or shall I slice your babies' necks ear to ear?"
―Ludovico to Caterina, 1488[src]

Later, Rodrigo Borgia hired them to kill Caterina and obtain the map of remaining Codex pages transcribed by Girolamo Riario,[1] and to steal the Apple of Eden, an artifact taken from him by Ezio Auditore da Firenze in Venice. The Orsi brothers agreed, and laid siege to the city of Forlì.[2]

In the process, they captured two of Caterina's children, Ottaviano and Bianca Riario. From there, Checco left Ludovico to be responsible for guarding Ottaviano, who he held captive on top of a lighthouse. After having rescued Bianca, Ezio climbed to the top of the lighthouse, killed Ludovico, and swiftly released the boy.[2] 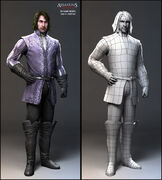 Checco (left) and Ludovico's portrait in the Villa Auditore's gallery

Ludovico with his brother, Checco