"You are so short-sighted. You'd hoard power and never use it, when we would better the condition of humanity."
―Lucy to Evie, 1868.[src]

Lucy Thorne (1837 – 1868) was a British Templar based in London during the mid-19th century as the second-in-command to Grand Master Crawford Starrick.

Recruited for her passion for occult philosophy and supposedly magical objects, she became the Order's resident expert on the Pieces of Eden. Lucy dedicated her time to studying and locating them, hoping to harness their powers to achieve Templar goals.

In 1868, Lucy began her research into a Shroud of Eden that was supposedly hidden somewhere in London. In her quest to find it, she frequently came into conflict with the Assassin Evie Frye, who also hoped to acquire the artifact and keep it out of Templar hands. After several occasions where the two rivals one-upped each other, Lucy eventually found her death at the hands of Evie when her archnemesis infiltrated the Tower of London by feigning capture.

Born to a successful tea merchant and the daughter of a minor noble house, Lucy grew up in a middle-class home. A clever child, she received an education that should have ensured a successful marriage when she was older. Instead, the young Lucy immersed herself in books, particularly those that dealt with obscure religious knowledge, magic and occult philosophy.[1]

During her teenage years, her father's business began to struggle financially, with much of the money going towards paying off debts. Although Lucy was encouraged to find a husband who could provide for her, she instead chose to work in her father's shop and gradually took on more of the management.[1]

In her spare time, Lucy continued researching occult objects such as the Shroud of Turin and began collecting rare manuscripts, frequently overspending at auctions to acquire them. At one such event, she outbid Crawford Starrick, who later tracked her down and attempted to buy the rare papers in her possession. Lucy refused his offer, but her enthusiasm for them greatly impressed Starrick to the point where he decided to inducted her into the Templar Order, bestowing on her the position of primary occult expert of the British Rite.[1]

In 1862, she and Starrick visited the Metropolitan Railway's construction site to speak with Cavanagh, who had been looking for an Apple of Eden. The pair were quite displeased with the man's lack of progress and made it clear that they expected better news in the future, following which they departed. Cavanagh, who had been planning to usurp Starrick, later ended up being killed by Marchant, who also managed to recover the Apple and deliver it into the Templars' hands.[2]

"I will return tomorrow. If you have not unlocked the device's secrets, forget your dogs and horses. I will leave you to the wolves. Good day."
―Lucy to Brewster, 1868.[src]

In serving the Order, Lucy proved her worth and became Starrick's second-in-command, as well as the local specialist when it came to the Pieces of Eden. In 1868, she traveled to Croydon to speak with David Brewster, who was experimenting on the Apple in an effort to activate it.[3]

Pointing out that his abduction of workers would alert the authorities sooner or later, Lucy threatened him to achieve results quickly or face the consequences, following which she departed. The artifact was destroyed in a lab explosion shortly thereafter, as a consequence of Brewster having pumped too much electricity into the Piece of Eden; however, Lucy had already set her sights on a new Precursor relic.[3]

Evie: "You want the Shroud to cement your own power - but what if you cannot control it?"
Lucy: "And why do you want the Shroud? Merely to keep the Templars from having it. How like an Assassin - to hold the power of eternal life, and yet be too afraid to use it. "
—Lucy and Evie during their initial confrontation, 1868.[src]

Back in London, Lucy focused her efforts on the Shroud of Eden, an artifact that was supposedly hidden somewhere in the city. To determine its whereabouts, she had a collection of Assassin documents shipped to her and personally went down to the docks in the City of London borough to oversee its transportation. However, when Lucy briefly left the carriage with the documents unattended to deal with some administration, Assassins Jacob and Evie Frye drove off with it.[3]

Lucy's men relentlessly pursued the Frye twins, eventually forcing the two Assassins to abandon the carriage and escape. Though most of the documents in the crate had been left untouched, a notebook had been taken, much to Lucy's consternation. She later returned to her study in the Kenway Mansion, which she used as an office of sorts.[3]

Unbeknownst to Lucy, Evie and Henry Green had been led to the Kenway Mansion as well, having followed the clues in the stolen notebook. They infiltrated the manor and discovered a hidden passage below the piano room; however, the mechanism involved music, which alerted a nearby Templar. Lucy was subsequently informed of the Assassins' presence, but arrived too late to stop them from blocking the passage. While she angrily attempted to break into the secret chamber, Evie and Henry made their escape.[3]

Undeterred by the setback, Lucy continued her research into the Shroud and later joined Starrick while he was meeting with Philip Twopenny and the Earl of Cardigan. The banker and the politician expressed their frustration at John Elliotson's assassination, but Starrick dismissed their worries. Lucy assured him she was nearing the end of her investigation into the artifact, before boasting that both Jacob and Evie would be dealt with in the near future.[3]

Later, Lucy followed a lead to the very top of St. Paul's Cathedral, but found that Evie had beaten her to it and acquired a necklace with a key to the vault that contained the Shroud. After chiding the Assassin for her Order's refusal to utilize the power of the Pieces of Eden, Lucy took out a dagger and attacked Evie. However, her strikes were repeatedly blocked by Evie, who managed to push Lucy back.[3]

Hurling a smoke bomb at her opponent to disorient her, Lucy continued her onslaught, rapidly slashing at Evie, but was eventually disarmed. In a last desperate attempt, she charged at the Assassin, who countered by side-stepping the attack. As a result, Lucy crashed head-on through a stained-glass window, but managed to grab onto the Precursor necklace around Evie's neck, arresting her otherwise deadly plunge.[3]

Hanging onto the piece of jewelry, Lucy attempted to drag her nemesis down with her, but Evie sliced through the chain to prevent herself from being impaled on jagged glass. As a result, Lucy plummeted down to the balcony below and, while the Assassin was regaining her bearings, fled the cathedral with the necklace.[3]

When fellow Templar Pearl Attaway was later assassinated, Lucy mourned with Starrick and promised him she would seek vengeance against the Frye twins for her death. The Grand Master complied, though he stipulated she could not do it openly, and then told her to increase the Templar presence throughout the city.[3]

"So, you have murdered me after all. But what good will that do you? The Shroud isn't here."
―Lucy during her final moments, 1868.[src]

Finding evidence that led her to believe the Shroud was located in a casket at the Tower of London, Lucy led a Templar task force there to investigate, despite the fact that such an act would be considered treasonous and punishable by death. Storming the Tower, Lucy had her men imprison the constable in charge of the garrison and impersonate a number of Royal Guards to keep the real ones from suspecting that anything was wrong. With these precautions in place, she and her men began scouring the Tower for the artifact, but could not find anything. While she was searching St. John's Chapel, Lucy was informed that Evie had been captured by one of the guards.[3]

Welcoming her nemesis into the chapel, Lucy questioned Evie on the Shroud's location, but received no answer, prompting her to turn her back on the Assassin and return her attention to the books on the altar. At this, Evie, who had only pretended to be captured, leapt forward, brandishing her cane-sword. Lucy grabbed a nearby candlestick and swung it at the Assassin in an attempt to defend herself, but Evie dodged the strike and plunged her sword into the Templar's shoulder from behind, piercing her lung and fatally wounding her.[3]

In her final moments, Lucy berated Evie for her ignorance, claiming the Templars would have used the Shroud to "better the condition of humanity". The Assassin pressed her for more information on the Shroud, but Lucy refused, taking whatever knowledge she possessed to her grave. Starrick was later informed of her death; ironically, he had been drafting a letter to her that would inform Lucy of the dissolution of their partnership following the Shroud's retrieval, effectively betraying her in the process.[3]

Lucy: "Pearl would not want justice. Pearl would want vengeance!"
Starrick: "Your passion is most welcome, Ms. Thorne."
—Lucy declaring her intent to take revenge on the Frye twins for Pearl's assassination, 1868.[src]

In spite of her education in the necessary qualities of a proper lady, Lucy, in many ways, defied societal expectations. Determined to follow her interests and succeed on her own, she refused to marry, instead devoting time and money to intellectual pursuits. Once she was part of the Order, Lucy expanded her range of knowledge even further through studying the Pieces of Eden, which she fervently believed could help the Templars improve society according to their ideals.[3]

Her usual composure belied a passionate, but also ruthless nature, as she could be very severe when dealing with fellow Templars of lower ranking, especially when the Pieces of Eden were involved; in one instance, she told an underling point-blank that the artifact they were looking for was worth more than the lives of him and his entire family. She was similarly harsh when interacting with Brewster, having little patience for his excuses despite his relatively high rank within the Order.[3]

Lucy was also prone to boast about the cruel deaths she would deliver the Frye twins, claiming she would have Evie hanged and then flay Jacob as he came to save her. Especially in the aftermath of Pearl's death, Lucy advocated harsh retaliation against the Assassins, indicating that she had cared for her fellow Templar.[3]

"We fought. I thought I had her beaten, but she is not a woman who gives up easily. I misjudged her strength."
―Evie reflecting on her fight with Lucy, 1868.[src]

While it is unknown what kind of training she received, Lucy was shown to possess some combat skill, wielding an ornate dagger as her weapon of choice. In her one-on-one confrontation with Evie, she slashed rapidly at her opponent in an effort to unbalance her. Lucy also had smoke bombs on hand, in case she was outmaneuvered and needed to tip the scales back in her favor.[3]

To accommodate such activity, Lucy wore practical clothing that allowed for mobility, but still included some ostentatious elements like the petite hat and feathered collar. Her attire also featured several templar insignias, with the most prominent being the one displayed on the band around her upper left arm. On her hip, Lucy wore a chatelaine that held several implements, including keys and a looking glass.[3] 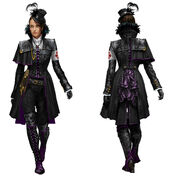 Back view of Lucy's character model

Lucy reporting the progress of her research