Gabiniani
Order of the Ancients

Lucius Septimius (c. 90s BCE – 44 BCE), also known as The Jackal, was a Roman Gabiniani stationed in Alexandria to protect the Ptolemaic kings and queens. He was a member of the Order of the Ancients and the killer of Pompey in 48 BCE. After the Battle of the Nile, he was pardoned by Julius Caesar and he, along with Flavius Metellus, managed to turn him and Cleopatra to side with the Order. He was killed by the Hidden One Aya on the Ides of March, shortly before the assassination of Caesar.

Septimius was the model of the Roman legionary, being strong, imposing, and athletic. In 67 BCE, he served with Pompey in the general's campaign against pirates in the Mediterranean Sea.[1]

In 55 BCE, he was permanently stationed in Alexandria as a tribune of the Gabiniani, a group of 2,000 Roman legionaries led by General Aulus Gabinius who were initially sent to Egypt to restore the Pharaoh Ptolemy XII Auletes (Cleopatra's father) to the throne. He and the Gabiniani were eventually tasked with protecting the royal family. Septimius soon became fond of his adopted country, and when he first arrived in Alexandria, he fell in love with the city and a local woman named Nebetia, whom he married.[2]

Septimius also became acquainted with several powerful men at Ptolemy's court, including Pothinus, Achillas and Ganymedes. After the pharaoh died of an illness in 51 BCE, Septimius became one of the members of the inner circle, serving as an advisor to the late pharaoh's son and successor, Ptolemy XIII, along with Pothinus, Ganymedes, and the boy's tutor, Theodotus of Chios.[2]

Quest for the vault

"Talk to your son. If the vault isn't open when we return, you'll never see him again."
―Septimius to Bayek, 49 BCE.[src]

By 49 BCE, Septimius had been inducted as a member of the Order of the Ancients, taking on the cryptonym "The Jackal". That year, he and his fellow members Medunamun, Flavius Metellus, Pothinus and Rudjek travelled with the envoy of pharaoh Ptolemy to the remote oasis village of Siwa. While Ptolemy's intention was to appoint Medunamun as oracle of Amun there in order to better control the remote, dissident town, the Order sought to unlock the vault beneath the Temple of Amun with the Apple of Eden in their possession to achieve the "power of the gods", hoping to subdue and control Egypt by establishing a New World Order. However, the temple priests refused to help them, and they decided to capture the local Medjay Bayek, hoping he would know how to unlock the Vault.[3]

They had their soldiers capture Chenzira, a friend of Bayek's son Khemu, and convinced the boy and his mother Rebecca that they only wished to speak with the Medjay. Chenzira led the soldiers to Halma Point, where Bayek was defeated in combat and knocked unconscious, after which he was brought inside the Temple of Amun and before the Vault door. Septimius held Khemu as a hostage, suggesting that Pothinus try his method of calmly asking for Bayek's help. Medunamun showed him the Apple, but the Medjay did not, in fact, know anything about the Vault.[3]

The interrogation was interrupted by the arrival of Ptolemy, and several members of the Order left to distract him. Septimius threatened Bayek, telling him that he would never see Khemu again unless he unlocked the Vault before their return. With the help of Khemu, Bayek was freed from his bindings and acquired a knife, trying desperately to fight off his captors. However, Flavius grabbed him and redirected the knife into Khemu's heart, killing him, before knocking Bayek unconscious.[3] Around the same time, Septimius and his men also captured the Nubian tribeswoman Kensa, but she eventually escaped.[4]

After the incident at the Vault, Septimius and the Order believed Bayek dead, not knowing that he had in fact begun to hunt them down out of revenge for his son's death. In 48 BCE, Septimius and the Gabiniani launched an assassination attempt on Cleopatra, the estranged sister, wife, and rival claimant to Ptolemy, the Order's puppet. He paid his subordinate, a fellow Gabiniani named Venator, drachmae for his own pleasure and for arming his men. Venator arranged for several of his men to infiltrate Cleopatra's palace in Herakleion, but Bayek and his wife Aya were able to foil the attempt, and Venator and his men were killed.[5]

At the same time, Pothinus, learning of Pompey's arrival in Egypt, sent Septimius to kill the general before he could come to Cleopatra's aid. With the help of his fellow Gabiniani, Septimius slew and beheaded the general[2],[5] bringing his head back to Ptolemy in Alexandria. The Order had hoped that this would help Ptolemy to secure an alliance with Julius Caesar, allowing them to expand their operations. However, they were foiled by Cleopatra, who was smuggled into Alexandria and the royal palace with the help of Apollodorus, Aya and Bayek. Caesar was swayed by Cleopatra to side with her over Ptolemy, causing Septimius and the Order to flee.[6]

In response, Pothinus and Septimius led Ptolemy's forces against Caesar. When Caesar sent emissaries, they were captured at the southern garrison in Alexandria, where Septimius tortured one of them and hoped to make him betray Caesar. Pothinus eventually stopped Septimius and reminded him of Flavius' plan: to besiege the harbor and trap Caesar and Cleopatra inside the royal palace. Thanks to the efforts of Aya and Bayek, however, the siege was broken.[6]

Battle of the Nile and aftermath

Septimius: "Is that all your fury, Medjay? No wonder it was so easy to take your country."
Bayek: "Keep talking, dog. You will find my fury soon."
—Septimius and Bayek fighting, 47 BCE.[src]-[m]

With the siege broken, the Battle of the Nile began, in which Septimius took part. While Bayek killed Pothinus, Septimius was tracked down by Caesar's speculatores. Believing him to be responsible for the murder of Khemu, Bayek confronted him with fury. Septimius was defeated, but before Bayek was able to kill him, the legionary punched him in the face, and the two entered a struggle. Bayek was then subdued by Roman soldiers on the orders of Caesar, who proclaimed that Septimius would be punished according to Roman law. Still furiously trying to reach Septimius to finish him off, Caesar eventually ordered his men to knock Bayek unconscious.[7]

After the battle, during which Ptolemy was also killed, the Order managed to turn Caesar and Cleopatra to their side, and Flavius, who was an advisor to Caesar, managed to have Septimius pardoned. Aya and Bayek were also dismissed from their service to Cleopatra, while Flavius and Septimius began exerting their influence over Cleopatra and Caesar, controlling both Egypt and Rome.[8]

Soon after Cleopatra's ascension to the throne, Flavius and Septimius broke into the Tomb of Alexander the Great and stole the Staff of Eden inside. They also reclaimed the Apple, which had fallen into the hands of Apollodorus, whom they killed. With the necessary Pieces of Eden in their hands, they traveled to Siwa and unlocked the Vault there. When Bayek's friend, the Medjay Hepzefa tried to stop them, he was killed, and they tore his heart (then considered the manifestation of the soul in Egypt) out of his body as a mocking gesture.[8] With the Vault open, Flavius put the people of Siwa under his thrall, controlling their minds. While Flavius returned to his seat of power in Cyrene, Septimius returned to Alexandria. Bayek was able to kill Flavius, the true killer of Khemu, while Aya pursued Septimius and Caesar to Rome.[8]

Aya: "The Staff..."
Septimius: "With the Order. I served them and your beloved Egypt. And I'll be rewarded in the afterlife. An eternity of drinking and whoring with my brothers."
Aya: "The only thing that waits for you is oblivion. For your name, your Order and the rotting corpses of your Gabiniani! Apep devour your fetid heart."
—Aya and Septimius during the latter's final moments, 44 BCE.[src]

By 44 BCE, Septimius had become a member of Caesar's inner circle. By then, Aya had relocated to Rome and established a presence for the brotherhood known as the Hidden Ones along with the senators Marcus Junius Brutus and Gaius Cassius Longinus. On 15 March that year, Caesar was preparing to officially become tyrant of Rome.[9]

At the Theatre of Pompey, Septimius spoke with Caesar before he appeared before the Senate, telling Caesar that he was a beloved ruler and a god. Though Caesar believed the Senate would oppose him, Septimius promised to be Caesar's "wolf" in "that parliament of clucking hens". As Caesar left, Septimius spotted Aya and leapt down into the central arena in the theatre to fight her, while Brutus and Cassius prepared to assassinate Caesar.[9]

Aya swiftly killed Septimius' men and duelled him. As they fought, Septimius claimed that Caesar was the Father of Understanding, taunted Aya over the death of Khemu and suggested that she flee or submit to Caesar and the Order of the Ancients. Aya warned that with Flavius gone, there was no-one to save him from her (and by extension Bayek's) vengeance this time. Although Septimius was formidably armed and heavily armored, Aya was more lightly armoured and nimbler, and eventually struck a fatal blow, saying that he would die as vengeance for Khemu. Septimius revealed that the Staff of Eden was in the hands of the Order, and claimed that he would ascend to the afterlife and drink and whore with his fellow soldiers there. Aya countered him, declaring that he, the Order and the Gabiniani would be forgotten, after which she slit his throat.[9]

In 38 BCE, six years after his death, Septimius appeared as an apparition to Bayek in the Duat, after having used the heart of an innocent child to cheat the scales and avoid Ammit. Bayek, serving as the medium for a ritual by the Oracle Nena, confronted Septimius, who later crumbled and disappeared, presumably due to his heart being too corrupted and was devoured by Apep.[10]

Septimius: "Your son pissed himself when he saw the knife."
Aya: "I will feed your heart to vultures. You have no honor. You stole everything from me!"
—Septimius and Aya, 44 BCE.[src]

Septimius was a rough and coarse individual. Though he loved Alexandria and his wife Nebetia, he could still be cruel, gleefully torturing people and taunting Aya over the death of her son. He was proud to be a Gabiniani and a commander in the Roman army, proclaiming that he would drink and whore with the Gabiniani in the afterlife. This also led to a certain degree of arrogance, as he would often mock his opponents.[1]

Septimius was suspicious of most people, constantly believing someone to be after him. This paranoia led him to suspect even his own allies, and he only trusted those he knew with certainty to be allies.[2] He could also be manipulative, helping to turn Caesar into a member for the Order of the Ancients by appealing to his lust for power and his desire of becoming a powerful ruler.[1]

Septimius was a strong and imposing legionary with a large build. In combat, Septimius wielded a flail, which he used with tremendous speed and precision. He also wielded a sword and was capable enough to go toe-to toe with Bayek, a Medjay.[1]

During Septimius' final battle with Aya, he wielded a flail that was seemingly powered by a Precursor relic, which granted him a number of advanced abilities. He was able to release shockwaves into the ground, grapple onto Aya and release a deadly blow and his strikes would shatter the ground, making him an even more powerful foe than before.[1]

Lucius Septimius is a historical character in Assassin's Creed: Origins, in which he is voiced by British actor Jonny Glynn. 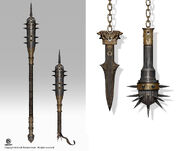 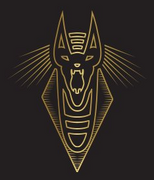 Lucius kneeling with Flavius in front of the globe

Septimius and his flails

Septimius held by Aya in the Memory Corridor

Septimius sent to the Duat by Aya