Lorenzo de' Medici (1449 – 1492) was an Italian statesman and de facto ruler of the Florentine Republic during the Italian Renaissance. Known as il Magnifico (the Magnificent) by contemporary Florentines, he was a diplomat, politician and patron of scholars, artists, and poets.

His life coincided with the high point of the early Italian Renaissance. Throughout his lifetime, he worked to maintain the fragile peace that existed between the various Italian states. When Lorenzo died, the relationships between states deteriorated, marking the end of the Golden Age of Florence, as the fragile peace he helped maintain between collapsed with his death.

Secretly, Lorenzo was an ally of the Assassins, particularly the House of Auditore. Lorenzo worked closely with Giovanni Auditore da Firenze, a close friend and ally, against the corrupt Borgia. After Giovanni's death, Lorenzo was saved from an assassination attempt by Giovanni's son, Ezio, during the Pazzi conspiracy. Ezio later carried out several Assassination contracts in cities such as Forlì and Venice on Lorenzo's behalf.

The most brilliant of Cosimo de' Medici's grandsons, Lorenzo would be sent on various diplomatic missions, even as a child. While his father, Piero the Gouty, was sickly and largely absent from Lorenzo's life, his mother, Lucrezia Tornabuoni, was a poet. She introduced her son to many prominent artists at the time, instilling in him a love of art and beauty that would greatly influence his adult lifestyle.[1] When he was six years old, Lorenzo fell into the Arno river and was saved from drowning by the then 19-year-old Giovanni Auditore,[2] an event which started the friendship between the two families.[3]

In 1469, when he was only twenty, Lorenzo became the head of the Medici family, at which point he quickly gained control of the Florentine government through friends in the city council, payoffs, strategic marriages and threats. While the populace was left with very little legitimate power, Florence flourished under Lorenzo's rule.[1]

While Lorenzo ruled over Florence, several parties conspired against him and the Medici family, in an effort to overthrow him and gain more power themselves. In response, Lorenzo assigned Giovanni Auditore, a close ally and an Assassin, to investigate.[4]

Giovanni successfully captured one of Rodrigo Borgia's men, and handed him over to Lorenzo for interrogation. The man revealed an assassination plot to kill Galeazzo Maria Sforza, the Duke of Milan and a powerful ally of Lorenzo's. Lorenzo then sent Giovanni to Milan in order to prevent the assassination. Unfortunately, Giovanni failed, and the assassination was successful, though he did manage to retrieve an encrypted paper from the thug that led the assassination.[4]

On 31 December 1476, Lorenzo accompanied Uberto Alberti to the Basilica of Santa Croce for the unveiling of Andrea del Verrocchio's work. Along the way, Lorenzo conversed with Uberto about the Auditore executions and was subsequently insulted by him.[5]

On April 26, 1478, Francesco de' Pazzi attempted to assassinate Lorenzo and his brother Giuliano, striving to become the ruler of Florence. In a frenzy, he leaped on Giuliano and stabbed him nineteen times, killing him. Lorenzo was wounded by two of the other conspirators, Stefano da Bagnone and Antonio Maffei, but rapidly drew his sword in a defensive attempt to stop them.[6]

He was quickly joined by Ezio Auditore, the son of the late Giovanni, and the two men fought off Francesco and the Pazzi guards. After emerging victorious from the battle, they proceeded onward to the Palazzo Medici to seek sanctuary. After Lorenzo's servant Poliziano opened the gate, Lorenzo was safely tended to inside his palazzo, and Ezio continued onward to assassinate Francesco de' Pazzi on Lorenzo's request.[6]

Soon after, Ezio met with Lorenzo on the Ponte Vecchio. There, Lorenzo told him how he had been saved from drowning by Ezio's father. He also gave Ezio the names of several Pazzi conspirators and a codex page, which he had recovered from Francesco's archives.[2]

In 1479, Lorenzo's palazzo was overrun by Pazzi hitmen, though Lorenzo himself managed to retreat to safety in one of his treasure rooms. As luck would have it, Ezio had been nearby at the time and noticed the bodies of Lorenzo's servants in the courtyard. He subsequently battled his way through the palazzo, eventually finding Lorenzo, who gave Ezio permission to take whatever he wanted from the treasure room as reward.[7]

In 1480, Ezio successfully found and killed Jacopo de' Pazzi, therefore successfully killing all of the major Pazzi conspirators. He met with Lorenzo in the Palazzo Medici's external courtyard, and Lorenzo thanked him once again, before rewarding him with the Medici cape.[8]

Ezio worked as Lorenzo's personal Assassin by performing assassination contracts – which mainly involved weeding out the few remaining minor Pazzi conspirators.[9] In his later years, Lorenzo faced increasing backlash against his rich lifestyle. He died in 1492, nearly broke and unable to prevent Girolamo Savonarola's rise to power in Florence.[1] 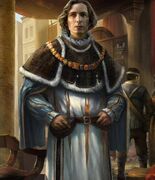 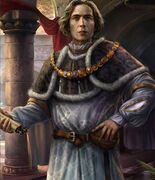 Memories art of Lorenzo with a codex page

Lorenzo and his wife at the Duomo