Assassin's Creed Wiki
Register
Don't have an account?
Sign In
Advertisement
in: Articles that need updating, Articles in need of sources, Weapons

Long weapons, also known as pole weapons or polearms, are a class of mêlée weapons characterized by long shafts as their basic structure. In general, the length of such shafts ensure that the weapons necessitate two hands to wield effectively in combat while their overall profile extend the wielder's effective range.

The most basic examples of long weapons include the quarterstaff and the spear, though numerous, far more sophisticated variants exist, such as the halberd, the Guandao, the Pike Hammer, the bec de corbin, and the corseque. Because of their long range, polearms can be employed to effectively keep adversaries at bay, and historically, they have served in dedicated defensive roles such as on the battlefield against cavalry. Seekers, guards specialized in the use of long weapons, were a mainstay of professional armies before firearms rendered mêlée weapons obsolete, and these soldiers were often deployed as guardsmen of entrances and exits.

The aptly named long weapons are essentially polearms: weapons whose main bodies are shafts typically longer than their wielders' height. The most basic variant of this is a staff, no more than a long stick typically constructed from wood, and almost all other variants are derived from embedding a deadly object—especially a blade or sharp point—at one end of a staff. Common examples include the spear,[1][2][3] the halberd,[3][4] and the pike.[5]

The function of polearms is to increase the wielder's leverage. The extended reach allows the user to maintain a greater distance from his or her opponent than he or she otherwise would with a shorter weapon such as a sword, keeping enemies at bay and yet still within striking range. For this reason, polearms can be formidable in defensive capacities; historically, solid formations of pikemen served as effective counters against cavalry.[5]

Because they deterred easy counter-attacks from wielders of shorter weapons, even the legendary Assassin Ezio Auditore da Firenze struggled to counter Seekers, combatants wielding polearms, for most of his life without relying on his Hidden Blades or an equally long weapon, such as a greatsword or another halberd.[1][2][4] Even so, it was not an utterly impossible feat for him to do so with a short sword, as he demonstrated throughout his operations in Spain in 1191, only that it demanded swifter reflexes and more precise technique.[6] Ironically, Ezio found it easier to combat Seekers when unarmed; wielders of polearms can be more susceptible to being disarmed, as the long handles provide prominent and safe targets for the grasp of an open hand.[1][2][4]

Given their size, long weapons can be more cumbersome than shorter alternatives, limiting the mobility of their wielders. Spanish Seekers tended to adopt stationary battle stances[6] while Ezio had a habit of discarding any polearm on hand before engaging in freerunning.[1][2][4] While polearms can hinder a user's ability at parkour, skilled Assassins, such as Arno Dorian and others of the French Brotherhood, have proven that this can be overcome through training.[3]

Historically, the poles of long weapons were constructed out of wood, a material not especially durable against the striking of a metal sword. As a result, they lacked the resilience of swords and could be snapped in two after a few slashes, or one, when used to parry against the Smash Attack of a heavy weapon. However, long weapons could still be used even if broken and even used to immediately counter a heavy weapon by ramming the broken ends into the body of the assailant.[1]

A standard technique utilizing a long weapon that pervaded throughout European history is the Sweep Attack, so called because it involved sweeping at an opponent's legs to cause him to trip and fall.

Although a sweep to the legs with a bladed polearm can sever the target's limbs entirely, a proper Sweep Attack is non-lethal, and thus delivered with the shaft of the weapon. The result is achieved by swinging the polearm around the rear of an opponent's legs, and through sheer force alone, knock their feet from right under them.[1][3] A collapsing enemy may even crash into those behind them, further disrupting enemy ranks.[1]

Correct execution of the maneuver, however, necessitates standing still to prepare for the sweep, effectively rendering its user highly vulnerable to interruption by an enemy attack. To compensate, the sweep can be performed with shorter preparation time, though at the cost of greater efficacy, as the more force placed behind a sweep, the wider the arc of its effect.[1]

The Sweep Attack was a fairly ubiquitous technique; Seekers throughout Italy and the Ottoman Empire practiced the maneuver during the Renaissance.[1][2][4] Assassins, too, were trained in it, and the Mentor of the Italian Brotherhood, Mario Auditore, taught it to his nephew Ezio Auditore.[1] While polearms were phased out by firearms by the French Revolution, the Assassins, who continued to service the weapons, still provided standard lessons on the technique to their recruits, such as Arno Dorian, during that era.[3]

From the Fall of Monteriggioni, Ezio Auditore learned a far more radical application of long weapons, one which from then on, he favored far more than the Sweep Attack whenever he had a polearm in his hand. With his expert marksmanship, Ezio could hurl a polearm directly at an enemy with extreme precision, skewering him or her from a distance of more than ten meters. As with a Sweep Attack, this technique requires preparation, as the user has to swing the weapon around to properly position his arms for the throw, as well as take time to accurately aim. Parallel to this, Ezio developed a similar technique with heavy weapons, wherein he threw the weapon at target with a powerful swing.[2][4]

**Only available after downloading The Curse of the Pharaohs

**Only available after downloading The Curse of the Pharaohs

*Only available after downloading Dead Kings

A Seeker armed with a spear leading the patrol

Ezio about to throw a spear at the guard 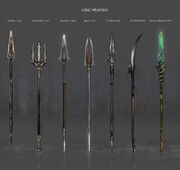