"I will find you, Mad One. On the far side of our doom."
―Loki, while uploading his consciousness into Yggdrasil.[src]-[m]

Loki was an Isu nominally aligned with the Æsir of Asgard led by Odin. However, secrets between the pair seeded a distrust that gradually unravelled their relationship.

Loki was later remembered as the god of mischief in Germanic and Norse mythology.

Known by many other epithets in Norse mythology, Loki also went by the alias Þökk when disguising himself as a jötunn.[4]

After some time, Loki was married to Sigyn. However, he eventually grew dissatisfied with his wife and engaged in a passionate but illicit affair with the Isu Dikastes of Atlantis, Aletheia, a union which produced three children: Fenrir, Jörmungandr, and Hel.[6] Loki would regularly leave Asgard to visit her and their eldest. As such, Aletheia and Loki were forced to smuggle their son to Asgard with the help from the Builder, who intended to travel there to kill Odin.[7] Before leaving for Asgard, Loki learned from his lover that the Capitoline Triad, composed of Juno, Jupiter, and Minerva, was working on a Seventh Method of salvation in order to survive the disaster. He was unconvinced by this statement, as they had already failed many times before.[8]

Loki then secretly allowed an attack on Asgard's walls,[5] creating a diversion in order to hide his son in the Well of Urðr.[7] After leaving him there, he often wrote to him in an attempt of trying to comfort Fenrir, but soon his plan was foiled, as Odin and Týr entered the site and found the child. Odin grudgingly spared him, having him caged instead.[9] A while after, a teenaged Fenrir escaped custody, fighting his opressor back. When Odin left the fight victorious, Loki rushed to his wounded son, revealing to the other Æsir that the Isu was in fact his son, exposing his affair and shocking Odin,[10] as Fenrir was prophesied earlier by the Nornir to kill him in the wake of the cataclysm.[5] That moment, an anomaly in the Earth's magnetic field appeared in the sky, prompting Odin to have Fenrir imprisoned once again in Lyngvi, at the care of Týr.[10] Then, after the Asgardian discovered and killed the Builder, who had infiltrated the Æsir's ranks, Loki tailed Odin to North America as the latter went searching for the much talked about Seventh Method in order to save his own kind.[7]

After a while, the one-eyed Isu imprisoned Fenrir for life[10] on grounds Loki deemed false. Outraged at Fenrir's unjust treatment,[11] Loki secretly told the Muspels how to poison Baldr with mistletoe,[12] something the god had told him earlier in confidence,[13] and left Odin to grieve over the loss of his child.[11][14]

As Odin left Asgard to search for a way to ressurect his son, Aletheia and Loki planned to steal the "Mead", the Seventh Method of salvation designed by the jötnar, that Odin had stolen from the Grand Temple years prior,[4][15] from his domains in order to escape their doom. In the process, Aletheia became gravely wounded, and Loki, wanting to save his lover, transferred her mind into Hermes' personal Staff of Eden. The method was similar to the fifth, with the Isu's mind being uploaded to the human gene pool. Loki and Aletheia then plotted to use this plan to their advantage, although Loki stated to his lover that his rebirth would take eons.[16]

On the day of the Great Catastrophe, Loki snuck into the Yggdrasil Chamber and waited until Odin's trusted eight had uploaded themselves and left before striking, killing all the guards and scientists present. Loki then killed Heimdall and took his mask before uploading himself.[17] Millennia later, in the 9th century, he was reincarnated into Basim Ibn Ishaq.[3]

A key personality trait of Loki is his intelligence and he is nearly as intelligent as others believe him to be. He hungered for lore, knowledge and wisdom and these desires were passed on to his human reincarnation of Basim. He also valued loyalty and was strictly loyal to Odin, his best friend and blood-brother, at all times. He remained loyal to Odin, even when the Æsir were at war with the jötnar, Loki's own kind. Loki even went on to state that he trusted Odin with everything and only became antagonistic towards Odin when the Nornir declared Fenrir, Loki's illegitimate son, would be Odin's killer during Ragnarök. [citation needed]

Loki also displayed a very protective side, especially concerning his family, and can become wrathful if they are in danger. When Odin has Fenrir imprisoned for life, Loki retaliated by secretly poisoned Odin's son Baldr with mistletoe berries. Loki was even unwilling to let his love Aletheia die and was determined to save her consciousness at least, despite knowing the great risks involved and neglecting her wishes to die in peace. Loki was also paranoid enough to not trust Odin's word that he would not harm Fenrir, stating that eventually Odin will try to kill Fenrir to prevent his fate.[15]

Loki's most prominent ability is his power to shape-shift into any form he wants. He used this to disguise himself as Freyja in order to fool the Builder.[7] During his fight with Odin in Eivor's reliving of Odin's memories, Loki displayed more supernatural abilities. While not possessing the raw physical might and battle lust of the Æsir Isu, he utilized his masterful swordsmanship in tandem with his superior speed and power to teleport short distances.

He even displayed some elemental abilities via his sword. He was able to generate electricity as well as throw shards of electricity towards his targets. He could even generate explosive balls of light from his sword by stabbing the ground. These balls can even act like mines and explode on impact by their targets.[15]

During the 870s, a group of cultists opposed to Jorvik laid a cursed artifact within a Ritual Circle in Eurviscire hoping that the city would burn and "yield to Loki's yoke."[18]

Loki had a totem named after him in the popular dice game Orlog. The piece "Loki's Trick" would banish opponent's dice from a round. An Anglo-Saxon man in Jorvik, Eurviscire possessed the piece, which he gave to the Viking shieldmaiden Eivor Varinsdottir of the Raven Clan after being defeated.[19] 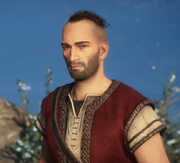 Loki using the Yggdrasil to upload his DNA and consciousness.