Assassin's Creed Wiki
Register
Don't have an account?
Sign In
Advertisement
in: Articles that need updating, Articles that are known by a nickname, Unidentified individuals,
and 5 more

Lo Sparviero (English: The Hawk) was a member of the Italian Brotherhood of Assassins, active in Rome, Florence and Monteriggioni during the Renaissance.

Lo Sparviero played an important role in the struggle between the Assassins and Templars, mainly during the rise of a mysterious organization affiliated with the Borgias, the Crows.

Prior to 1501, Lo Sparviero was tasked with assassinating one of Florence guards, but while carrying out his mission, he was discovered by other guards. After having cleared a bloody path among them, he had to flee, climbing one of the churches of the city to escape.[1]

In 1501, Lo Sparviero was tasked with eliminating Borgia mercenaries disguised as tax collectors inside the walls of Monteriggioni. The three Borgia mercenaries were successfully assassinated, and later the Assassins found out that they had been a distraction and that one of Mario Auditore's hidden chests underneath Villa Auditore, in the Auditore Family Crypt, had been stolen.[2]

Lo Sparviero was then tasked with assassinating Pietro de Galencia, a Templar doctor in Monteriggioni who had stolen the chest. Pietro's mission had been to find and secure the blueprints of the Hidden Blade, and to accomplish his mission, Pietro had kidnapped and tortured an old man, father of an Assassin, into telling him the location of the chest. Lo Sparviero managed to assassinate Pietro, but he had already delivered the chest to the Templars.[3]

In 1506, Lo Sparviero was tasked with protecting Leonardo da Vinci from a group known as "the Crows" after he had been kidnapped by the Hermeticists, led by Ercole Massimo. The Crows were staved off and Leonardo was kept safe by the Assassin.[4]

Some time later, an Assassin scout who's escorting Leonardo out of the catacombs before, explored the catacombs again, he found the chest that's been stolen from Monteriggioni years ago. Machiavelli had tasked him and three more Assassin apprentices to recover the chest, but all four of them had been slain by the Templars. In retaliation, Machiavelli sent Lo Sparviero himself to recover the chest and avenge the fallen Assassins. He succeeded in his mission and brought back the chest, as well as the Hidden Blades of the apprentices. Machiavelli opened the chest, and found a modified version of the Hidden Blade.[5]

After that, Machiavelli received a letter from Demetrio il Silente, a weaponsmith that was forced to create modified versions of the Hidden Blade for the Crows. When the weaponsmith refused to continue creating more weapons for him, Cesare had cut out his tongue. This caused Demetrio to plot against Cesare, asking Machiavelli for help. Lo Sparviero managed to save Demetrio by bribing the captains of the guard. The Assassin took Demetrio to Machiavelli, where the weaponsmith confirmed that the modified Hidden Blade that they had recovered was a "Corvix Blade", an upgraded version of the Hidden Blade created with the blueprints stolen from Mario's chest.[6]

Machiavelli, alerted by some strange events happening near the Colosseum, sent Lo Sparviero to investigate. He discovered a large amount of boxes full of Corvix blades and that the Crows were responsible. The Assassin then decided to kill the camp's leader, a man called Matteo Favero. Lo Sparviero chased Matteo to the top of the Colosseum, where he killed him.[7]

The Assassins then took over the camp, driving out the Crows and capturing a bald man who Lo Sparviero had seen previously talking to Matteo. The man said his name was Sirus Favero and claimed to be a mere arms merchant working for Cesare, although confessing his hatred towards the Borgias. Machiavelli decided to let to Sirus join them as long as Sirus told them all he knew about Cesare and the Crows.[7]

Lo Sparviero is the main protagonist of Assassin's Creed: Identity where his appearance can be customized from among a range of preset faces. Canonically, his appearance is unverified although some of the faces can be ruled out due to being identical to those of major characters such as Ezio Auditore da Firenze. Notwithstanding this, in the prologue and tutorials, his face is always predefined as the default selection which may potentially imply his canonical appearance. His prologue appearance is also the Berserker class type.

Lo Sparviero also has a number of preset names for the different classes; 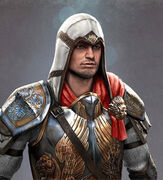