"The Apple has been put to rest, perhaps it would do you good to focus on painting. You seem to be doing decent work on this one."
―Ezio Auditore da Firenze remarking on the Mona Lisa.[src]

Lisa del Giocondo (1479 – 1542), born Lisa Gherardini and posthumously known as Mona Lisa, was an Italian noblewoman who shared romantic affection with Assassin Ezio Auditore da Firenze. Centuries after her death, Lisa passed to posterity thanks to a famous painting made by Leonardo da Vinci, which depicted her.

In 1504, while visiting her father's lands near Florence, Lisa rescued Ezio after she found him unconscious and laying among the bodies of mercenaries sent by Cesare Borgia that he just killed. While his injuries healed, Ezio stayed in the barn during several days as Lisa hid him and tended to his wounds. During their time together, they developed mutual feelings but due to Lisa's faithfulness to her husband and Ezio's own commitment to the Brotherhood, the Assassin left before anything could happen.[1]

They met again a year later, as Ezio visited Leonardo after saving the unaware maestro from assassins sent after him. Entering his workshop, Ezio discovered Lisa posing for Leonardo. Upon recognizing him, the young lady gratified him with a little smile which Leonardo asked her to keep for the paint. Deciding not to disturb the artist, Ezio left without telling his friend about the failed attempt on his life and without speaking to Lisa. After this, Lisa and Ezio never saw each other again.[1]

Upon first seeing the work in progress in 1506, Ezio remarked positively about the piece; however, Leonardo rebuked that Lisa was "badly drawn", with an overdone, meaningless smile.[2]

In 1519, in order to entertain a dying Leonardo, Ezio revealed to his friend how he met Lisa before she posed for him.[1] Shortly before his death, Leonardo gave the painting depicting Lisa to his longtime assistant, Salaì.[2]

Ezio and Leonardo looking at the unfinished Mona Lisa 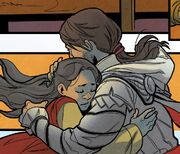 Lisa and Ezio parting ways in 1504