The lion is a felid in the genus Panthera distinguished by the great manes of its males. It was historically endemic throughout Africa and the western half of Asia, favoring savannahs and grasslands but not deserts and dense forests.

During the Twentieth Dynasty of Egypt, lions were so prized by pharaohs for their sacred power that they were almost hunted to extinction.[1]

In the time of the Peloponnesian War, lions inhabited various regions of Greece and were hunted for their fangs, claws, and manes. These were quite valuable; in 431 BCE, they were priced at at 40 drachmae apiece, 14 drachmae apiece, and 38 drachmae respectively.[2]

An incarnation of the Nemean Lion prowled the Sinkholes of Herakles in Argolis during the Peloponnesian War. Daphnae, the acting leader of the Daughters of Artemis, tasked the Spartan misthios Kassandra to hunt it down.[3] Kassandra did so, bringing the lion's pelt to Daphnae as proof.[4] Mount Athos within the Triple Peninsula of Chalkidike in Makedonia was also home to a legendary lion of its own.[5]

In Ptolemaic Egypt, lion claws were popular among commoners as pendants. They were valued at 35 drachmae each in 47 BCE.[6]

During the Seven Years' War, the Templar Shay Cormac obtained a figurehead of a lion for his ship Morrigan after his fleet completed a series of missions in the Mediterranean Sea. Upon completing more fleet missions in Rio de Janeiro and Brest, France, Shay acquired a set of sails decorated with a lion rampant and a ship wheel named for the beast respectively.[7]

The main entrance of Mycenae, the city said to have been founded by the hero Perseus,[8] was called the Lion Gate due to the sculpture of two lions flanking a column.[9]

Later, the lion became emblematic of Sparta, especially of its nobility. Leonidas I of Sparta, who fell in the Battle of Thermopylae, was revered with the erection of a lion statue at the Hot Gates of Thermopylai.[10][11] Pausanias of Sparta also used the cryptonym "Red-eyed Lion" in his secret correspondence.[12] When the Spartan misthios Kassandra, the scion of the Spartan Agiad family, finished fixing up her ship the Adrestia, lions adorned the shields the ship was equipped with.[2]

The lions were revered in 1st century BCE Egypt, especially by a group of bandits around Sapi-Res Nome who named themselves Disciples of the Lioness, working alongside their revered lionesses.[6]

Soldiers affiliated with the Kingdom of England who marched to the Third Crusade were commonly called Lionheart Crusaders after the epithet of their king, Richard the Lionheart. Their armor and flags were emblazoned with the lion.[13]

In Greek mythology, the Nemean Lion was a beast slain by the hero Herakles as part of his famous labours. Afterwards, Herakles wore the beast's skin until it became as much a part of him as his club. [citation needed] Lions were also animals associated with the Greek god of the sun and poetry, Apollo.[14]

In Egyptian mythology, the goddess Sekhmet was portrayed as a woman with the head of a lion, and among her many titles was "Lady of Slaughter".[6]

Of special note was the griffin, a mythical creature which was an amalgam of a lion and an eagle. It was present in myths ranging from the Achaemenid Empire to Greece,[2] and even proved the basis of a name for a bow in Ptolemaic Egypt.[6]

In Assassin's Creed: Odyssey, the mural featuring a lion hunt is based on a Lucanian tomb painting from the 3rd century BCE.

In Assassin's Creed, the Keeper of the Lions Passant achievement can be earned by collecting the all the Richard Flags in the Kingdom. 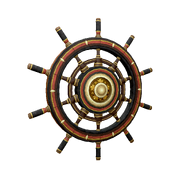 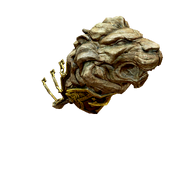 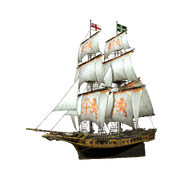 A mural of a lion hunt

The Lion of Leonidas

The Nemean Lion in Argolis