View source
watch 02:19
Wiki Targeted (Games)
Do you like this video?
Play Sound

Lin is an Assassin and a descendant of Shao Jun,[1] who was abducted by Abstergo Industries for her genetic memories.

In 2016, Lin was imprisoned at the Abstergo Foundation Rehabilitation Center in Madrid as a test subject alongside other descendants of Assassins such as Nathan, Moussa, and Emir.[2] During her time in the facility, Lin became the test subject of Doctor Kaori Kagami,[3] as the Templar hoped to uncover the secrets of Shao Jun and the location of a "Precursor treasure" through her descendant.[4]

At the end of October 2016, her group saw the arrival of Callum Lynch, the son of Assassins Mary and Joseph Lynch, who nevertheless did not have any allegiance to the Assassins. For this reason, her friends remained wary of the newcomer, fearful that he would ultimately side with their Templar enemies. They were particularly suspicious of his activities in the Animus, where he was forced to search for the Apple of Eden acquired by his Spanish ancestor Aguilar de Nerha.[2]

During Callum's last Animus session, Lin and her friends staged a prison break, retrieving weapons throughout the facility in the hopes of fighting their way out. They rallied to the Animus chamber—opened by Emir—just as Callum was inducted into the Assassin Order through a memory of his mother. With Callum as a definite ally, the group successfully escaped, though not without losing two of their own: Nathan and Emir.[2]

In the chaos, their captors Alan Rikkin, CEO of Abstergo Industries, and his daughter Sophia fled on a helicopter, and they were unable to stop their retreat. After Alan recovered Aguilar's Apple of Eden from the tomb of Christopher Columbus in Seville, Lin and her friends tracked them to London, where Alan was due to present his success before the Council of Elders of the Templar Order. Just as Alan was presenting his Apple of Eden, the Assassins launched their attack, killing the guards and allowing Callum to assassinate Alan from behind.[2]

Lin is a character in the film Assassin's Creed, where she is portrayed by the actress Michelle H. Lin. 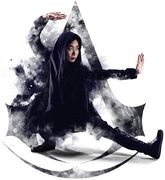 Lin with the Hidden Footblade