"A library hidden beneath the stones of Masyaf. A sanctum full of invaluable wisdom."
―Ezio Auditore regarding the library, 1511.[src]

The library of Altaïr Ibn-La'Ahad was a hidden chamber beneath the fortress of Masyaf. It was rumored to have contained hundreds of books and the wisdom gained from the Apple of Eden by the legendary Assassin Altaïr Ibn-La'Ahad. It was also said to be the hiding place of an extremely powerful weapon and of a means of locating the fabled Grand Temple, which caused the Assassins and Templars to take interest in the library during the Renaissance.

The library was guarded by a stone door that was described as "harder than steel." This door was engraved with Arabic script, an Assassin insignia, and five constellations as keyholes. The door could only be opened by placing the five Masyaf Keys in their respective places, along the stars of the constellation Aquila, "the eagle" that bears "Altair" as its brightest star.

"I see. This is not a library at all. It is a vault."
―Darim Ibn-La'Ahad, on the true nature of the library.[src]

Sometime before 1257, Altaïr Ibn-La'Ahad, Mentor of the Levantine Assassins, had a library built under the gardens of Masyaf. When finally completed, the library was used to store all of the knowledge Altaïr had gained from studying the Apple. During the Mongol siege of Masyaf in 1257, Altaïr realized the danger of the fortress being overrun, and wished to keep the contents of his library out of the wrong hands.[1]

As such, he had his son Darim bring several books with him to Alexandria, while others were given to Niccolò and Maffeo Polo, along with the five library keys, for the two to hide in Constantinople. Finally, on fleeing the returning Mongol troops, the Assassins abandoned their fortress. Only Altaïr himself remained, intending to leave the Apple locked safely within the library and "far from eager hands," until the time was right. After placing the Piece of Eden at the back of the library, he sat down to imprint his final moments into the sixth Isu Memory Seal in his hands and then passed away peacefully in his chair.[2]

"To achieve true peace, mankind must think and move as one body, with one master mind. The secrets in the Grand Temple will give us just that. And Altaïr will lead us there."
―Ahmet speaking of the Templars' intentions.[src]

Sometime in 1509, Ezio Auditore discovered a letter that was written by his father Giovanni in 1458. In it, Giovanni spoke of Altaïr's library as a "sanctum full of invaluable wisdom," prompting Ezio to depart on a pilgrimage to Masyaf the following year, which would span many months. However, by that time, a Byzantine Templar force led by Leandros had already taken over the fortress, after having discovered the journal of Niccolò Polo, which also made mention of the library.[2]

It took a year for them to discover the door, but by March 1511, three months after the discovery, the workers had not even managed to make a dent on the library's entrance. As the Templars in Constantinople frantically searched for the library's keys, Ezio arrived at Masyaf, only to be confronted and captured by Leandros' forces. After escaping his own execution, Ezio traveled to Constantinople, in a race to find the keys before the Templars and gain access to the library.[2]

Over time, Ezio discovered that the Templars only wished to enter the library to discover the location of the Grand Temple, which they thought would allow them to achieve their ultimate goal of a New World Order. Finally, in early 1512, after several months and the deaths of Templars and Assassins alike, Ezio was able to secure all the keys to the library and return to Masyaf to open the entrance.[2]

Sofia: "What do you hope to find behind that door?"
Ezio: "Knowledge, above all else. Altaïr was a profound man and a prolific writer. He built this place as a repository for all his wisdom."
—Sofia Sartor and Ezio at the library entrance.[src]

The same year, Ezio and Sofia Sartor reached the library entrance with the five keys. Using his gift to see both the correct placement and orientation of each of the keys, Ezio opened the stone door and entered the library. There, he found no books or wisdom, but only the skeleton of Altaïr, which had lain undisturbed for the past two hundred years, and used the sixth seal to witness the end of Altaïr's story. Though Ezio approached the Apple hidden in the library, he refused to touch it, saying that he had "seen enough for one life," the same words spoken by Altaïr centuries before.[2]

As he abandoned his sword and Hidden Blades within the library, Ezio began to speak aloud to Desmond Miles, though he admitted that he did not know how the latter could hear him. He only hoped that Desmond would be able to answer the questions he had asked, and that he would "make all this suffering worth something in the end." After seeing a vision of his descendant, Ezio exited the library, leaving his life as an Assassin behind.[2] Later in the 16th century, the Apple was retrieved from the library, and eventually came into the possession of Queen Elizabeth I.[3]

Concept art of the library door

Concept art of the library's interior 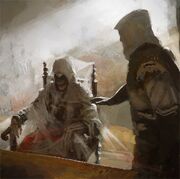 The corridor leading to the library's main chamber

The hidden door at the back of the library

The main chamber of the library

The main chamber of the library

Altaïr finally resting after a lifetime of duty