Assassin's Creed Wiki
Register
Don't have an account?
Sign In
Advertisement
in: Articles in need of sources, 1726 births, 1760 deaths,
and 15 more

Shay: "Connor may inherit the house, but you'll be Mentor."
Liam: "We'll see."
Shay: "Whatever you say, Prince Regent of the Assassins."
Liam: "You call me that again and I'll throw you in the ocean!"
—Liam O'Brien and Shay Cormac on the former's future.[src]

Liam O'Brien (1726 – 1760) was a member of the Colonial Brotherhood of Assassins operating in the British Colonies during the Seven Years' War. A childhood friend of Shay Cormac, Liam was responsible for bringing Shay into the Brotherhood. In spite of Liam being a few years his elder, Shay formed a brotherly bond with him, even though Liam was wiser and more experienced.

Liam was born in Plymouth, Massachusetts. A family of Irish immigrants, the O'Briens struggled to survive on their farm for years, until they moved to New York where Liam's father began to work for a shipping merchant. Eventually, Liam joined his father at work, loading ships bound for England. It was at work where he first met a young Shay Cormac, and the two became fast friends. Liam looked after the younger Shay, who lived in a rough neighborhood and had a knack for getting himself into trouble.[1]

Over the next years, Liam became aware of his employer's growing wealth, even as his fellow workers remained underpaid and mistreated by their superiors. Eventually, the tensions rose to a breaking point, and Liam recruited several of his co-workers in a plot to rob their employer and distribute the money among themselves. However, the group was caught in the middle of the heist, and Liam was forced to kill a man in self-defense. Wishing to protect his son, Liam's father took the blame for the murder and was executed by the authorities.[1]

In the coming years, Liam drifted from one job to the next and continued to rob the city's richer citizens, sending the money to his aging mother. He also distanced himself from his fellow friends, including Shay. In 1738, he met Achilles Davenport, who gave him small tasks and errands to perform. Over time, Achilles' influence over Liam grew, and Liam looked to the older man as a mentor. Eventually, in 1743, Achilles inducted Liam into the Assassin Order as his first student, who in turn helped recruit the other members of the Colonial Brotherhood, such as Chevalier de la Vérendrye, Kesegowaase, and Hope Jensen.[1]

In 1748, Liam reconnected with Shay, who had just lost his father, and managed to get Shay back on his feet. The two became more inseparable than ever, and Shay was soon included in the list of inductees. At that point, Achilles tasked Liam with keeping an eye over Shay, just as he had years ago.[1]

At some point, Liam worked with Adéwalé, a member of the West Indies Brotherhood, which he considered to be a great honor.[2]

In January 1752, he and Shay arrived at Port Mernier to rendezvous with Chevalier and his fellow smugglers. While the two were hunting, Chevalier's smugglers were captured. Arriving at his camp, Liam and Shay were both berated by Chevalier, to which the latter prompted a fistfight with Shay. At first, Liam did not intervene, but after seeing the situation, he broke up the fight and gave Shay a sword and a dagger and the two silently assassinated several Royal Navy sailors and freed the smugglers before claiming their sloop-of-war, the Morrigan. Shay became the captain of the ship and Liam his First Mate. With the Morrigan, the three Assassins sank the ships of the Royal Navy which attacked Chevalier's Man O' War, the Gerfaut. After this victory, the Assassins returned to the Davenport Homestead.[2]

Two months later, at the Homestead, Liam and Shay witnessed the arrival of Adéwalé who wanted to take supplies for the population of Port-au-Prince after the earthquake that destroyed the city a year before but also reported the disappearance of two Pieces of Eden to Achilles, the Voynich manuscript and a Precursor box, which together could give a map of Precursor Temples. During their meeting, Liam helped trained Shay in firearms with the use of his pistols. After Shay received from Achilles the mission to recover the two artifacts, he and Liam sailed to Port La Joye to meet up with Chevalier before sailing to Anticosti Island to meet up with the spy Le Chasseur who gave them a lead on the manuscript and the box, which is at the hands of the Master Templar Lawrence Washington.[2]

In July, Liam and Shay met Achilles, Hope, and Kesegowaase at Two Bends to inform them of Washington. Achilles tasked Shay and Liam to investigate on the Templar. With the Morrigan, the Assassins followed a ship to Mount Vernon, Washington's mansion. Liam stayed on the Morrigan while Shay infiltrated the party organized by the Templar. After the Assassin killed the Master Templar, the Morrigan was attacked by the fleet near the mansion. Shay arrived on his ship and the crew escaped from their enemies. While Shay doubted the necessity to kill Washington, who was already dying from tuberculosis, Liam assured his friend that this was the right thing to do.[2]

In April 1754, Liam and Shay met again with Chevalier and le Chasseur in the Anticosti's fortress to have information on Samuel Smith, the Templar who had the box. Aboard the Morrigan, the Assassins tracked Smth's ship, the Equitas, before she beached on Terra Nova. Shay followed and killed the Templar before reclaimed the box. Liam congratulated his friend for his actions but Shay doubt on the necessity of Smith's death. Liam reassured Shay that Smith was a menace, as their next target, James Wardrop.[2]

Three months later, Liam and Shay met Hope at the Albany Congress. She informed them that Wardrop was there and that he had the manuscript. Shay tracked Wardrop while Liam and Hope team up to be sure the Templar did not escape. Shay succeded to kill Wardrop and took the manuscript for the Brotherhood. With the two artifacts and the help of Benjamin Franklin, the Assassins located a Precursor Temple in Lisbon. Shay was sent to Lisbon but Liam could not follow his friend because of another assignment given by Achilles.[2]

The two friends only met again at the beginning of the year 1756, when Liam saw Shay accusing Achilles of voluntarily sending him to trigger an earthquake in Lisbon with the power of the Temple. Liam separated his friend and his Mentor. During the night Achilles called his Assassins to stop Shay who had stolen the manuscript. Liam attempted to stop his friend by shooting on a powder keg which resulted in a small landslide but Shay escaped from the trap. The runaway Assassin was cornered to a cliff by his former allies. Liam pointed a gun to dissuade Shay to flee. Shay, who could not carry the deaths of the civilians of Lisbon, decided to kill himself by falling off the cliff to destroy the manuscript. Liam shouted to prevent the suicide of his friend but Chevalier shot on Shay who dived in the cold water with the manuscript.[2]

At 1757, having known Shay's survival and now aiding the Templars, Liam and Kesegowaase attacked Albany in an attempt to reclaim the Voynich Manuscript that the Templar George Monro held after rescuing Shay. While Kesegowaase distracted Shay, which ultimately cost his life, Liam pursued Monro, killing or wounding his guards before setting the house on fire with the Colonel inside. With the manuscript recovered, the Assassins continued their search on the Precursor sites.[2]

At 1759, the Assassins met once more to discuss the location of the Precursor site which Liam pointed out that Hope managed to replicate Franklin's experiment. The Templars, however, manipulated the British Army and launched an attack on her mansion. Hope sent Liam away, who told her that they will depart. Soon after, however, Liam went back to her mansion and found her dead, having been killed by his former friend Shay which may have an impact on his life and fueled his desire on avenging her and his fallen comrades by killing Shay should he be given the chance.[2]

In 1760, Liam and Achilles undertook a journey to a an Isu Temple located in the Arctic Ocean, following the coordinates revealed by the manuscript and the box. When they arrived, the pair discovered the Temple did not house a Piece of Eden, but one of the artifacts capable of causing severe seismic activity, if it was disturbed. Pursued by Haytham Kenway and Shay Cormac, Liam tried to vengefully shoot Shay but was stopped by Achilles. Liam accidentally fell onto the artifact, causing the area to destabilize and begin to collapse around them.[2]

Fleeing from the Temple with the manuscript, he was pursued by Shay. Liam revealed that Chevalier had hidden the Precursor box where neither Shay nor the Templars could find it. Liam also had an angry exchange between Shay over Hope's death, which Shay mournfully pleaded that he had no choice.[2]

Eventually, Liam was cornered at a cliff side and dueled with Shay. However, the cliff side began to collapse from the earthquake, causing both men to fall. Shay used Liam to break his fall, and the latter was fatally wounded. Questioning Shay's motivation for joining the Templars, Shay stated that he was trying to save the world. Upon hearing this, Liam sardonically quipped that he hoped the world Shay was attempting to build with the Templars would be a good one. As Liam began succumbing to his injuries, he took out the manuscript and handed it to his former best friend before he finally died. Shay then pulled Liam's Assassin hood over him, as a sign of respect and began mourning for his former best friend before retrieving the manuscript.[2]

Liam appeared to be a patient, pensive, and respectful man. He did not hesitate to intervene between two of his fellow Assassins fighting. His character was mostly peaceful and calm, but he would not hesitate to forego friendship for the sake of fulfilling his duty to the Brotherhood. Liam also unquestioningly believed in the Creed, and felt a sense of great admiration for Adéwalé and his fellow Colonial Assassins, seeing them as people from whom it was necessary and useful to learn. Liam was, considered by Shay, also a "wise" man. Liam was not a man for small talk, being far more serious and driven than Shay, who was more laid back and prone to jokes.[2]

Having known each other since childhood, Liam was considered to be Shay's best, if not only, friend in the Assassin Brotherhood. While most of his comrades either outright despised Shay or treated him with cold condescension, Liam served as a big brother figure who offered words of encouragement when needed. When Shay defected to the Templars, Liam took it personally and was determined to kill him, especially after learning of Hope's demise at Shay's hand.

"I don't miss!"
―Liam, regarding his confidence in his pistol skill, to Shay in their final encounter.[src]-[m]

Liam was a highly skilled Assassin, having been Achilles' first student and possessing over a decade's experience in the Order. A proficient marksman and swordsman, he was capable of defeating a number of British soldiers in quick succession. Accompanying this, Liam possessed a knowledge of sailing, acting as quartermaster of the Morrigan.[2]

In terms of physicality, Liam was a skilled freerunner, capable of performing the Leap of Faith. His arsenal consisted of Hidden Blades, a sword and dual pistols, with the last of these appearing to be his preferred weapon. He was not only very confident, but also proud of his marksmanship; when Shay accused him of having been the one to shoot him in the back, Liam denied this, remarking that it was Louis-Joseph, and boasted that he never missed a shot to reinforce his claim.[2] 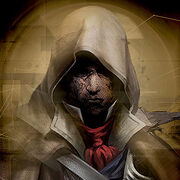