Sacred site for the coronation of Ireland's High Kings.

The Lia Fáil, meaning Stone of Destiny, is a stone monument of Isu origin[1] at the Inauguration Mound on the Hill of Tara in Meath, Ireland.

While the legends said that the stone could only be activated by the one true king of Ireland,[2] by the 9th century, the royal poetess Ciara ingen Medba activated the stone as the last known member of the bloodline. Enraged by High King Flann Sinna's decision to outlaw druidic paganism in favor of Christianity, Ciara took control of his soldiers using the stone. However, after she was confronted by both Flann and the Viking jarlskona Eivor Varinsdottir of the Raven Clan, Ciara was convinced to put an end to her plot and the Lia Fáil was subsequently shattered. What was left standing was only a remnant of the original stone.[3]

An artifact likely forged during the Isu Era, the monument was presumably left behind by the Isu following the Great Catastrophe that wiped out most of their race, leaving only those directly descended from the Isu to be able to access the monument's powers. Following the emergence of the Celtic cultures in Ireland, the monument was eventually discovered by its druid residents and it became a celebrated legend. While most druids left the artifact alone, a portion of the druids greatly revered its power and suit to use it for their own goals and control.[4]

By the medieval period, the spread of Christianity and Norse cultures greatly displaced most of the druid faiths and influence.[5] Desperate to keep their culture alive and prevent it from being wiped out, a 9th century secret society of druids called the Children of Danu, led by Eogan mac Cartaigh,[6] planned to use the stone's power to bring down Christians to their control. The cult recruited Ciara ingen Medba, who was the last known member of the bloodline who could access the monuments powers.[3]" However, Ciara disagreed with their extremist methods and defected from the cult.[7]

When Ciara connected herself to the Lia Fáil, it endowed her with various advanced abilities. She could take possession of people's minds, perform teleportations, generate illusions, conjure up ethereal apparitions of the Children of Danu's High Druids to further power the stone, unleash energy sprouts which drained victims of their vitality, and could even use the illusionary effects to mask her appearance. It also imbued her with greater combat ferocity and speed.[3]

In Irish mythology, the Lia Fáil was said to be one of the four treasures left behind by the supernatural Tuatha Dé Danann which would shout when the rightful High King stood on it. It could also purportedly rejuvenate the king and bestow a long reign. As written in the Lebor Gabála Érenn, or the "Book of Invasions", the Lia Fáil was cleaved to its current height of 1 meter by a furious Cú Chulainn for refusing to call out when his foster-son Lugaid Riab nDerg was coronated. From that moment on, it remained silent for all other High Kings except for Conn of the Hundred Battles, the ancestor of Niall Noígíallach, and Brian Boru, the founder of the O'Brien dynasty following the Uí Néill's fall from power.[8]

Concept art of the Lia Fáil decorated for Flann's coronation 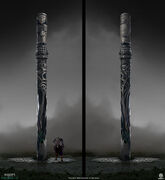