Lemnos is an island in the Aegean Sea, located between Lesbos to the northeast and Skyros to the southwest. Together with Thasos, it formed the Hephaistos Islands.

According to Greek mythology, the god Hephaistos had a limp. When the goddess Hera discovered this, she threw him off Mount Olympos. He landed in the sea near Lemnos, where sea deities rescued him.[1]

At some point during the 420s BCE, the Spartan misthios Kassandra explored the island, managing to hunt down a member of the Delian League branch of the Cult of Kosmos.[2] 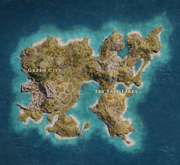 Map of Lemnos
Add a photo to this gallery

Retrieved from "https://assassinscreed.fandom.com/wiki/Lemnos?oldid=837656"
Community content is available under CC-BY-SA unless otherwise noted.