Leila (unknown – 1342) was a Templar agent operating in Egypt in 1341. She was responsible for the assassination of the Egyptian Sultan Al-Nasir Muhammad and the Assassin Numa Al'Khamsin.

When Leila was seven years old, she was part of Sultan Al-Nasir Muhammad's personal harem in his palace in Cairo. Against her will, she had to obey the Sultan, enduring all of his abuses; for years she lived in anxiety, developing a seething hatred for Al-Nasir.[1]

Assassination of the Sultan

Sometime in 1341, Leila was contacted by the Templars and offered a chance to avenge the humiliations she had suffered throughout the years - without hesitation, Leila accepted the deal to kill the Sultan. One night, while still active as a servant, Leila was summoned by Al-Nasir. When she was asked to accompany him, Leila seduced the Sultan and killed him by slitting his throat, in the name of the "Templars' fight against oppression". She then made an attempt to flee, but was captured while making her escape from the Palace.[1][2]

She was subsequently imprisoned, sharing her cell with the Assassin Numa Al'Khamsin, known also as El Cakr. After offering Numa something to drink, Leila told him she had killed the Sultan and that she was to be executed the following day.[2]

Leila then gave her personal story to the Assassin and with her knowledge of the Palace, proposed an escape. Numa, who did not consent to her business with the Templars, asked why he should trust her, for which Leila explained that she wasn't a true believer in the Templar cause and that she was not interested in politics nor money; the Templars had merely delivered the weapon and she had acted simply out of hatred and vengeance.[1]

At that moment, a few guards arrived to pick up Leila for her execution. Just as the guard proceeded to take Leila with him, Numa attacked him, further killing another two guards present. The Assassin then said he had played his part in the escape and Leila knew it was her turn. In return, she led Numa through the palace, while he killed any guards along the way.[1]

Eventually, the pair escaped and headed for a safe house that Leila had arranged in the city in order to lay low after the murder of the Sultan. There she seduced Numa into a sexual encounter, after which Numa slipped away during the night, leaving a rose on the bed for Leila to find when she woke up.[1]

After she had escaped with Al'Khamsin, Leila was contacted by the Templars once again. This time, she was tasked to retrieve the Scepter of Aset, an artifact which conferred great charisma and leadership to its wielder. The Templars had discovered that the Scepter was being guarded at Edfu Temple by none other than Numa's disciple, Ali Al-Ghraib. However, finding the artifact was not the only priority, Leila was also tasked to kill Numa. Knowing that the Assassin would go to the Temple as well, she and a few other Templars quickly traveled there to be one step ahead.[1]

In Edfu, the Templars led by Leila tortured Ali, breaking his wrist and forcing the boy to cooperate in eliminating his master, in exchange for his life. Upon his return, Numa believed that his mission was completed and he thanked Ali for his loyalty. Though, upon noticing Ali's bandaged wrist, the group of hooded Templars surrounded the Assassin.[1]

Leila then came forward, her identity still unknown to Al'Khamsin. She explained that the Scepter was no longer the only priority of the Order and that Numa was such a nuisance that his death was now a new priority. Now lowering her hood, she told El Cakr that she felt no hate towards him but had to follow orders before she began dueling with him. Perfectly trained, Leila revealed that everything she had told Numa about her commitment to the Templars was a lie before putting a dagger into his heart, instantly killing Numa before the eyes of his distraught apprentice. However, keeping her promise to spare Ali, Leila let the shaken Assassin apprentice go.[1]

Searching for the Scepter

With the Scepter now in Templar hands, Leila went to the Sultan's Emirs in Cairo to deliver them the artifact. However, while wishing to give the Scepter to the Emirs, she discovered that the ankh-shaped box was empty. Quickly, she rushed in pursuit of Ali, who had thrown the Scepter in a well near Edfu Temple. By chance, Leila stopped at the well to drink some water and soon spotted the Scepter's luster. Following this, she clambered into the well to retrieve it, but fell down upon her ascent with the artifact; as a result, Leila lost consciousness, almost drowning in the water of the well.[1]

Three days later, passing Bedouins saw and rescued Leila. However, having become amnesiac, Leila had forgotten her allegiance to the Templars and the very existence of the Scepter, which she unknowingly left behind in the well. She then left with the Bedouins, but died nine months later from internal bleeding as a result of giving birth to the child she had conceived with El Cakr during their night in the safe house.[1] 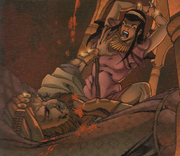 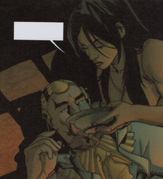 Leila offering Numa something to drink 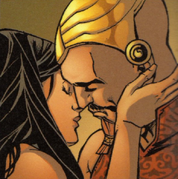 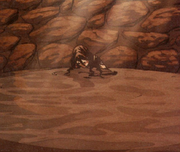 Leila lying on the bottom of the well, unconscious
Add a photo to this gallery

Retrieved from "https://assassinscreed.fandom.com/wiki/Leila?oldid=783188"
Community content is available under CC-BY-SA unless otherwise noted.