Legacy of the First Blade

Legacy of the First Blade

http://www.assassinscreed.com
Legacy of the First Blade is a downloadable content expansion pack for Assassin's Creed: Odyssey which was released on December 4, 2018. It is the first out of two expansion packs for the game, alongside The Fate of Atlantis.[1]

A three-part episodic story arc, it is comprised of the memory sequences Hunted, Shadow Heritage, and Bloodline,[2] with each episode being released roughly every six weeks from December 4, onward.[1]

The expansion introduces players to the first person to ever use the Hidden Blade and will reveal more about the history that ultimately led to the formation of the Assassins.[1]

Fight alongside the legend who first wielded the Hidden Blade to change the course of history while learning why the Assassins chose to fight from the shadows.[3]

Encounter the legend who first used the Hidden Blade. Learn why he chooses to work in the dark, and uncover the schemes of a new enemy.[4]

Fight alongside Darius! Steal The Tempest's powerful weapon, help the threatened innocents escape, and destroy the blockade of the Greek Order.[5]

Everything has led to this moment in your conflict against the Order of the Ancients. Put your differences with Darius aside to stop the evil forces hunting you once and for all in Bloodline, the final episode of Legacy of the First Blade.[6] 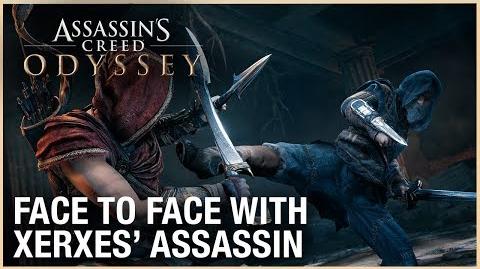 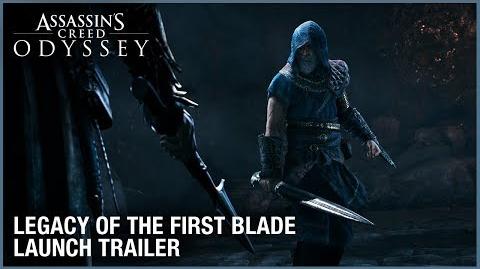