Leasleach (died c. 881), also known as The Whisper, was a druidic priestess and a member of the Children of Danu. Leasleach held the title of High Druid.

Leasleach believed herself to be the offspring of the Isu called The Morrigan, who was the goddess of disease and death. Leasleach spent her time in the bogs of Meath, prodding and disturbing mummified corpses in the belief that they were her victims in a previous life. The corpses oozed swamp waters, which she used to concoct her poisons. At some point, Leasleach accepted an offer to join the Children of Danu and soon rose to the rank of a High Druid, due to her poisonous creations being invaluable to the cult.[1]

The Viking jarlskona Eivor Varinsdottir of the Raven Clan came across the cryptonym of "The Whisper" when she assassinated The Spider and recovered a clue from her personal effects. The clue was a note to The Spider from The Oak, who stated to tell The Whisper to create a more effective poison and that her location may be at Boyne Tombs. Eivor traveled to Boyne Tombs and started investigating. Eivor looked around on top of the tombs and found a note on top of a pile of crates. The note was a warning by a bystander who had the misfortune of being in the presence of The Whisper. The note stated The Whisper wanted to consummate their love at a stone ritual circle in a small harbor near the Boyne river. Eivor traveled and found a ritual stone circle, south of Kells Abbey. Eivor probed the area and found a note on a stone table near the circle. The note was a prayer from The Whisper herself about her routine of creating her poisons in the bogs. Eivor deduced the identity of The Whisper, Leasleach, and her location in the bogs east of Inchroe.[2]

Eivor traveled within the bogs and searched for a wandering Leasleach. Upon looking through the misty bogs, Eivor caught sight of a walking Leasleach. Eivor assassinated Leasleach and stopped her work for the Children of Danu. Among Leasleach's personal effects, Eivor recovered her amber shard.[2] 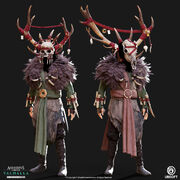 Concept art of The Whisper alongside The Mist