Assassin's Creed Wiki
Register
Don't have an account?
Sign In
Advertisement
in: Articles in need of sources, 1630s births, 1717 deaths,
and 11 more

"Capital and resources. That's where money is made. And, sir, let me tell you... honor bought is more enjoyable than honor won, if a touch less permanent."
―Laurens Prins to Laureano Torres, on why he became a businessman, 1717.[src]

Crew of the Whydah
Templars

Laurens Prins (1630s – 1717), often anglicized as Laurence Prince, was a Dutch buccaneer and an officer under Captain Henry Morgan. Following Morgan's death, Laurens became a successful slaver, and an associate of the Templar Order in the Caribbean before his death at the hands of Edward Kenway.

Laurens Prins was born in Amsterdam in the 1630s and spent most of his life operating out of Port Royal, Jamaica. In the early days of the Golden Age of Piracy, he sailed as a privateer and developed a reputation for courage fighting against the Spanish Navy on behalf of the British crown, notably taking part in Sir Henry Morgan's infamous raid on Panama in 1671.[1]

After retiring from privateering, he settled in Kingston and entered the slave trade, seeing it as a more profitable venture than military service. This made him as a target for the local Assassin Brotherhood.[1]

In November of 1715, after the Sage Bartholomew Roberts escaped from the grasp of Laureano de Torres y Ayala, Grand Master of the Caribbean Templars, Prins and Torres met briefly to discuss Roberts.[2]

In 1716, with the approval of Jamaican governor Archibald Hamilton, Prins expanded his slavery operations to Mexico, providing him with British soldiers as bodyguards, where he attempted to capture several Assassins at their stronghold in Tulum. However, the soldiers serving under his command were killed by the pirate Edward Kenway and Assassin Mary Read, Prins' prisoners were freed, and the operation failed.[2]

In January 1717, word reached Prins that Torres was still actively seeking Roberts, who had recently begun working under Prins' employ. Seeing a possibility for financial gain, Prins contacted Torres and offered to sell Roberts to him for a hefty ransom.[2]

In February 1717, his flagship slave galley, the Whydah, was attacked by the Assassin Samuel Bellamy and his two associates, Olivier Levasseur and Alonzo Batilla. The Piece of Eden that it transported on the behalf of the Templars was stolen, but Prins managed to survive the encounter and continue his slaving.[3][1]

Prins met Torres at the Kingston docks that April, and led the Templar through the city to a safe place to make the exchange. Along the way, they were tailed by Kenway and Read, who both sought to claim Roberts for themselves. After discussing slavery, religion, politics, and Prins' past, the two men finally reached a secluded area. Torres offered part of Roberts' ransom to the slaver, but Prins refused, having noticed that they had been followed by Kenway and Read. He then called a group of guards and made his escape, narrowly avoiding death at the hands of Read.[2]

Frightened by the attack, Prins secluded himself inside his mansion the following day. That night, as he stood in the garden of his mansion, Prins was assassinated by Kenway, who had infiltrated the grounds to free Roberts. With his last breath, Prins dismissed Kenway's notions about his motivations, claiming that he too had only ever sought wealth.[2]

Portraits of concept art of Prins can be found in the Port-au-Prince brothel La Dame en Rose[4] and the New York City house owned by Barry and Cassidy Finnegan.[5]

Historically, Lawrence Prince made many slaving voyages before disappearing after 1715.[6] 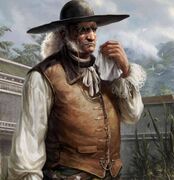 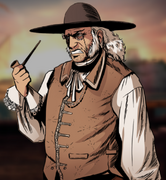 Prins as he appears in Assassin's Creed: Pirates