An important palace and residence located in Rome.

The Lateran Palace (Italian: Palazzo Laterano), formally the Apostolic Palace of the Lateran (Italian: Palazzo Apostolico Lateranense), is a landmark in Rome. Originally an ancient palace of the Roman Empire, it later became the main Papal residence for over a millennium. By the early 16th century, the palace had fallen into disrepair. The Followers of Romulus used the palace to hide one of their scrolls, although the building itself was left unguarded.

Originally a palace during the Roman Empire, the Lateran was the home of the Laterani family who served as administrators for many Roman emperors. Eventually Constantine I himself took control of the building when in a final act of juvenile dominance over his rival, he married Maxentius' sister, Fausta, who possessed the deed at the time.[1]

In the 4th century, the Lateran became the principal Papal residence, but lost favor after two fires in 1307 and 1361.[1]

In August 1503, the Assassin Ezio Auditore da Firenze entered the Lateran Palace to retrieve the hidden scroll, which helped him to recover the fabled Armor of Brutus. Ezio returned to the palace later that month, this time to assassinate the corrupt Minim priest, Ristoro, in the palace's courtyard.[2] 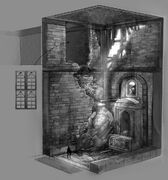 Entrance to the Lateran Palace

A ruined room in the Lateran

The blocked shrine
Add a photo to this gallery

Retrieved from "https://assassinscreed.fandom.com/wiki/Lateran_Palace?oldid=790658"
Community content is available under CC-BY-SA unless otherwise noted.