"Designed by a master builder from Gythion, the lavishly expensive Lakonia was Sparta's newest attempt to crush the Athenian navy. From stories told, it seemed to be worth the drachmae."
―Description of the ship on the message board[src]-[m]

Lakonia was a war trireme constructed by the Spartan navy and deployed during the Peloponnesian War.

Designed by a master builder from the Village of Gytheion, the trireme was lavishly equipped with bright red sails and an eagle figurehead in an attempt to crush the Athenian navy. During the Peloponnesian War, it was destroyed by the Adrestia commanded by the Spartan misthios Kassandra, who claimed the ship's sails and finery for her own.[1]

Lakonia is the only legendary ship in Assassin's Creed: Odyssey to have two different message board notes, one of which features above as this article's leading quote, the other which is as follows:

A mysterious Spartan ship known as Lakonia has set sail from the port of Gythion. We suspect it's bound to forge a new alliance that would devaste the Delian League. Stop it at all costs.

Another view of Lakonia 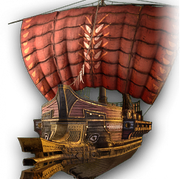 The design of Lakonia
Add a photo to this gallery

Retrieved from "https://assassinscreed.fandom.com/wiki/Lakonia_(ship)?oldid=870386"
Community content is available under CC-BY-SA unless otherwise noted.