"They call me many things: Murderer. Tagliagole (Cutthroat). Thief. But you may call me La Volpe."
―La Volpe introducing himself to Ezio Auditore, 1478.[src]-[m]

Gilberto[1], known mainly as La Volpe (English: The Fox), was the leader of the Florentine and Roman thieves' guilds, and a member of the Italian Brotherhood of Assassins. Very little information was known about La Volpe, and any that was seemed mythical.

In 1478, La Volpe assisted Ezio Auditore in locating an important Templar meeting, which resulted in Ezio preventing the Pazzi Conspiracy from succeeding. Ten years later, La Volpe was present in Venice, where the Assassins reclaimed an Apple of Eden from Rodrigo Borgia.

After the fall of Monteriggioni, La Volpe moved to Rome, where he fought the Borgia influence in the city. However, he refused to work with the Assassins because of his suspicions towards the Italian Brotherhood's Mentor Niccolò Machiavelli. Later, after Ezio had helped him by saving some of his thieves, as well as providing him with evidence of the real traitor, La Volpe agreed to assist the Assassins again.

Very little is known about La Volpe's early life, though there were multiple myths regarding him and his abilities as a thief. He was said to have robbed the Papal carriage without any guards noticing him, including the Pope who was sitting inside.[2]

In 1467, during a night in Florence, he allegedly was seen on the rooftops of the Palazzo della Signoria, the Palazzo Medici, and the Basilica di Santa Croce all at the same time. It was also said that he was immortal and that his unusually bright violet eyes could see through buildings.[2]

"Follow me. But we must move fast! Think you can keep up?"
―La Volpe to Ezio, as they approach Santa Maria Novella, 1478.[src]

In 1478, La Volpe learned that Ezio Auditore da Firenze, the son of the late Assassin Giovanni Auditore da Firenze, had returned to Florence to assassinate the Templar Francesco de' Pazzi. Leonardo da Vinci informed Ezio that La Volpe would be able to assist him, thus Ezio sought him out in the Mercato Vecchio.[3]

While looking for the legendary rogue, a thief pickpocketed Ezio and fled. Ezio was able to catch up with him, but as he demanded his money back, La Volpe appeared and returned the stolen money, saying that he would be willing to aid Ezio if he could keep up with his own freerunning skills. La Volpe then led Ezio to the Santa Maria Novella, where the Pazzi conspirators were to convene later that day.[3]

From there, La Volpe waited for Ezio near to the sewers, where Ezio would later emerge after eavesdropping on the Templar meeting. Ezio informed him that the Templars were planning to kill the Medici during High Mass, in order to claim Florence for the Pazzi and place their own politicians in charge. La Volpe replied that it would be disastrous if Lorenzo de' Medici were to be killed, as he was a powerful ally of the Assassins, though Ezio assured him that he would not allow the Templars to slay him.[3]

In 1488, La Volpe and the other Assassins met in Venice to acquire an Apple of Eden from Rodrigo Borgia, the Grand Master of the Italian Templars. When they arrived at Rodrigo's location, La Volpe saw him fighting with Ezio Auditore, and promptly intervened alongside the others.[3]

Eventually, Rodrigo fled, leaving the Apple behind for the Assassins. After answering many queries from Ezio, they proceeded to induct him into the Assassins, with each member, including La Volpe, performing a Leap of Faith afterwards.[3]

"Find the Apple, Ezio! It can't be far."
―La Volpe when the Assassins lost sight of the Apple.[src]

In 1494, Florence was taken over by Girolamo Savonarola, who had stolen the Apple that Ezio possessed after an incident in Forlì. In 1497, La Volpe and Paola, a fellow Assassin and the leader of the Florentine courtesans, were contacted by Niccolò Machiavelli to help him liberate the citizens, after Ezio assassinated each of Savonarola's lieutenants.[4]

After the lieutenants were eliminated, La Volpe, Paola, Machiavelli and Ezio gathered in front of the Palazzo Pitti to see the angry mob stand up to Savonarola. However, Savonarola tried to control the crowd with the Apple, but it was quickly knocked out of his hand by a knife thrown by Ezio.[4]

Following this, La Volpe and the others gathered once more to witness Savonarola's execution, though Ezio reconsidered, deciding that the "mad monk" should not have to suffer the pain and humiliation of being burned alive in front of a crowd. The Assassin hurried towards him, and managed to kill Savonarola with his Hidden Blade before the flames reached him.[4]

La Volpe then watched from the sidelines as Ezio began to give a speech, who, after looking towards his fellow Assassins, approvingly spoke of how he had been guided to his own path by "a few strangers."[4]

In 1499, La Volpe gathered with his fellow Assassins in the Villa Auditore in Monteriggioni, in order to unveil the location of a Vault. Through the Codex pages, they discovered that the Vault was located in Rome.[3]

They also discovered the true reason that Rodrigo Borgia had become Pope, as it had allowed him to obtain the Papal Staff, another Piece of Eden. While Ezio planned to infiltrate the Sistine Chapel, La Volpe accompanied the other Assassins to Rome, where they created an opening for Ezio by distracting the Borgia forces.[3]

"The guild will be run from here. Visit me whenever you like. There might be objectives to pursue that will help our cause in the city."
―La Volpe in La Volpe Addormentata.[src]

After the Assassins returned from Rome, Monteriggioni was besieged by the Borgia, and as a result, the Assassin Mario Auditore was killed by Cesare Borgia. After this, some members of the Assassin Order, including La Volpe, traveled to Rome to dispose of the Borgia's influence there.[5]

When Ezio found him in Rome, La Volpe was the leader of the local Thieves Guild, and with Ezio's funding, the two established La Volpe Addormentata, a base of operations for the thieves under the disguise of an inn. However, unlike in Florence, La Volpe refused to cooperate with Niccolò Machiavelli, calling him a traitor to the Assassin cause.[5]

The thief believed that Machiavelli had betrayed them, citing that he was behind an attack on the Roman thieves, and had probably sided with the Borgia, since he had left Monteriggioni the night before it was besieged. However, La Volpe was willing to assist the Assassins after Ezio had helped him in saving some of his men from the Borgia guards.

Ezio later found the real traitor, a Venetian thief by the name of Paganino, who happened to have remained behind at the siege of Monteriggioni. At this, the Assassin quickly rushed off to keep La Volpe from killing Machiavelli.[5]

Arriving just in time to inform him of the situation, Ezio handed over a document to La Volpe, making him realize that he was mistaken and subsequently concealing his weapon. Following this, La Volpe immediately grew warmer to an oblivious Machiavelli, greeting him as a friend and ally.[5]

La Volpe was also present during Claudia Auditore da Firenze's induction into the Assassin Order, and the battle against Cesare's remaining followers before his arrest.[5]

Ezio: "How do you know my name?"
La Volpe: "It is my business to know everything in this city."
—Ezio meeting La Volpe.[src]

La Volpe was a very agile man, able to outrun Ezio despite being older than him. He was the epitome of an Assassin, working in the shadows to such an extent that his existence was considered to be a myth.[3]

However, La Volpe seemed to be quite wary of those who had not earned his full trust, immediately suspecting his fellow Assassin Niccolò Machiavelli of treachery as soon as he began working suspiciously. However, he completely trusted Ezio, deeming him worthy of such faith after working at his side on several occasions.[5]

La Volpe was shown to be very fond of his thieves, often going off to defend them should they be in danger, and even asking Ezio to aid them through several assignments.[5]

La Volpe is a fictional character first introduced in the 2009 game Assassin's Creed II, where he is voiced by the Canadian actor Vito DeFilippo. DeFelippo later returned to reprise his role in the 2010 sequel, Assassin's Creed: Brotherhood.

The definite article la in La Volpe's name referred only to the fact that volpe, the Italian word for "fox", is a feminine noun. Contrary to popular belief, it does not mean "vixen", and is more often used when referring to someone being "cunning as a fox". While the novels Assassin's Creed: Renaissance and Assassin's Creed: Brotherhood revealed La Volpe's given name to be Gilberto, he nevertheless said that he preferred to be called "La Volpe." 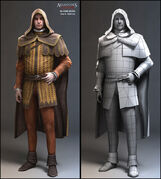 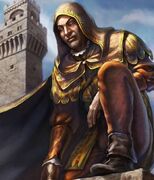 La Volpe in Florence with Ezio

La Volpe conferring with one of his thieves

Niccolò, Volpe, and Ezio talking about the traitor

La Volpe with his fellow Assassins

La Volpe as he appears in Assassin's Creed: Rebellion