"As I entered the Faubourg Saint-Marcel, I saw nothing but dirty, stinking little streets, wretched black houses, a general air of squalor and poverty, beggars, carters, menders of clothes, sellers of herb-drinks and old hats."
―Jean-Jacques Rousseau describing the district's Saint-Marcel area.[src]

La Bièvre was one of 18th century Paris' seven major districts. It was located in the south-east of the city and consisted of the Saint-Jacques, Saint-Marcel and Panthéon subdistricts.

Named after the Bièvre river that ran through it, the district was perhaps most renowned for the multitude of tanneries and workshops in the Saint-Marcel area. The imposing Gobelins Manufactory, where the finest tapestries in France were produced, was also located there.

Yet, the region itself was marked by poverty; due to the absence of city guards, thugs were free to extort the local merchants and use tanneries as cover for smuggling operations. In both cases, the Assassin Arno Dorian dealt with the perpetrators. The Saint-Jacques and Panthéon areas were less lawless, with the Panthéon in particular being under guard permanently.

Concept art of buildings along the Bièvre

Concept art of buildings along the Bièvre

Concept art of the Bièvre 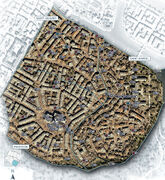