Assassin's Creed Wiki
Register
Don't have an account?
Sign In
Advertisement
in: Articles in need of sources, Individuals, 1215 births,
and 8 more

"It is the arch that supports the bridge."
―Kublai Khan.[src]

Kublai Khan (Mongolian: ᠬᠤᠪᠢᠯᠠᠢ ᠬᠠᠭᠠᠨ; Chinese: 忽必烈; 1215 – 1294) was the fifth ruler of the Mongol Empire and the first Emperor of the Yuan dynasty of China from 1260 to 1294. A grandson of Genghis Khan and brother to Hülegü Khan, Kublai Khan is the second most well known of the Mongolian rulers, Kublai Khan's empire stretched even further than that of Genghis Khan did. [citation needed] He was the first Mongol to rule over the whole of China, and his throne was located in what is now Beijing.

In May 1275, Kublai Khan welcomed the Polo brothers, and Niccolò Polo's son Marco into his court, not knowing that the famed explorers were in fact Assassins. The Polos' alliance with the Khan and Marco's seventeen years of service gave the latter the opportunity to break into Kublai's vault in Shangdu and steal back Altaïr Ibn-La'Ahad's Codex,[1][2] which had been taken by the Mongols from the two elder Polos to whom Altaïr had entrusted it.[3] 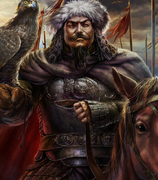 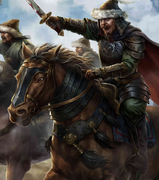 Kublai leading his men in battle