"The transcription reads: 'He who owns this diamond will own the world, but will also know all its misfortunes. Only God, or a woman can wear it with impunity.'"
―Hamid explaining the Koh-i-Noor's cursed legacy, 1839.

The Koh-i-Noor (English: Mountain of Light), or Syamantaka Mani as it was formerly known, is a Piece of Eden in the form of a diamond that holds such an immense amount of power that it can bind all of the other Pieces' fates. It was rumored that only God or women could control its power.[2] The artifact is also capable of locating other Pieces of Eden.[3]

During the Human-Isu War, the Koh-i-Noor belonged to Juno. When her father's human servants revolted and killed Saturn, an enraged Juno used the artifact to burn to a cinder all the humans around them with blasts of blue energy.[4]

At some point the Koh-i-Noor belonged to the Isu Durga, who somehow imprinted her consciousness into the artifact.[2]

Following the extinction of the Isu civilization, the Koh-i-Noor passed through the hands of many dynasties on the Indian subcontinent.[2]

In the early 19th century, the Koh-i-Noor ended up in the possession of Ottoman Sultan Selim III. At some point the Black Cross Tavis Olier discovered the existence of the diamond and tried to recover the artifact but he disappeared and was presumed dead.[9]

In 1805, Napoleon sent one of his agents, Jan van der Graff, to steal the Koh-i-Noor from Selim but despite making an alliance with the new Black Cross, Solomon Bolden, van der Graff failed and was captured. Thrown into the same cell as Olier, the Flemish was trained by the old Templar during the three years they spent together, until his escape in 1808. During his escape, van der Graff stole the Koh-i-Noor from under the nose of the Assassins sent to recover the Piece of Eden.[9]

Eventually, the diamond found its way back to India, into the hands of Ranjit Singh, the founder of the Sikh Empire. Wary of the artifact's curse and its power, Singh decided to hide it in an ancient temple located beneath his summer palace.[2]

It was stolen in the year 1839 by the Assassin Arbaaz Mir and hidden on Raza Soora's person, who later gave it to Singh's granddaughter Pyara Kaur. As Pyara attempted to leave Amritsar's imperial palace after her grandfather's assassination, the princess was set upon by the British Templar Francis Cotton.[2]

To defend her, Raza clawed at Cotton's forehead with his nails, allowing Pyara the time to activate the Piece of Eden. Suddenly possessed by the Isu Durga, the being gave a statement referring to humanity as "splintered", but that the race was guided through messages left behind by their own across time.[2]

Horrified at the appearance of Durga, Cotton fired multiple shots at the Precursor, though upon striking the Koh-i-Noor with a bullet, the diamond shattered and severed Pyara's connection to the Isu woman. As Arbaaz shielded Raza from the blast, the force of the energy's release gave form to a tiger, which brutally savaged Cotton, leading to the latter's demise. After the Koh-i-Noor reconstructed itself,[2] the Piece of Eden ended up in the possession of Hamid, Arbaaz's Mentor.[8]

However, in 1841, Hamid was captured by Templars William Sleeman and Alexander Burnes, who sought to use the Koh-i-Noor to power a Precursor box. Both artifacts were eventually reclaimed by Arbaaz at the Katasraj Temple, but in response, Sleeman laid siege to the summer palace in Amritsar, taking Pyara hostage. During the subsequent confrontation, the Precursor box ended up back in the Templar's hands, but Arbaaz and Pyara were able to escape unharmed with the Koh-i-Noor in their possession.[8]

Arbaaz would later hand over the diamond to Ethan Frye, trusting him to keep it safe.[8] Ethan hid the artifact somewhere in India where it remained until the end of the 19th century.[10]

In 1850, a replica of the diamond was confiscated by the British East India Company and became part of the British Crown Jewels when Queen Victoria was proclaimed Empress of India in 1877.[2]

By the early 20th century the Koh-i-Noor was in possession of Black Cross Albert Bolden who secreted the artifact in a Swiss bank. After Bolden's 'death' in 1927, his fellow Templar Rufus Grosvenor discovered that he was in fact alive and tried to blackmail Bolden into giving him the diamond but to no avail. Eventually, Grosvenor stole the Koh-i-Noor from Bolden in 1937, after killing his family and luring him into a trap.[4]

Grosvenor fled to Spain, which was in the middle of a civil war, where the Templar hoped to manipulate the Spanish Assassin Ignacio Cardona into unlocking the powers of Koh-i-Noor thanks to the Assassin's great concentration of Isu DNA. However, after an initial success, despite Cardona being almost consummed by the unleashed powers of the artifact, Grosvenor's progress were halted by the intervention of a vengeful Bolden, whom hunted him to Spain.[4]

Bolden, together with Cardona, eventually confronted Grosvernor in a wrecked church, who convinced the latter to use the jewel and unleash its powers. However, Grosvernor's plan backfired when the Assassin directed the jewel towards him, unleashing a series energy which engulfed the village and caused the church to collapse above them. Though the artifact was thought to have been destroyed, it was in fact still intact, as Cardona had created an illusion to made it seemed that it was destroyed. With the collapse of the church, the artifact now lies buried deep within the ruins.[4]

In 2013, after his raid on the Assassin hideout in Mumbai, the Templar Juhani Otso Berg discovered that Bolden somehow came in contact with the Koh-i-Noor at some point during his life. The Order then tried to find one of his descendants to learn more about the artifact and its location.[9]

In 2016, the Templars found André Bolden in Philadelphia and convinced the old man to work with them to explore the memory of his ancestor during the 19th century. However, Juno's followers who had infiltrated the ranks of the Templars tried to kill Bolden to prevent the Order from recovering the Piece of Eden before them. He was saved by Berg, who, realizing that a fifth column was attacking the Templars from within, put the search for the diamond on hold while tracking the moles as the new Black Cross.[9]

In March 2017, Juno, who wanted to recover the Koh-i-Noor, infiltrated the Animus in which Charlotte de la Cruz was rendered catatonic after Guernica Moneo, an Instrument mole among the Assassins, sabotaged the device. Exploring the Assassin's bloodline, the disembodied Isu discovered that the diamond was last seen during the Spanish Civil War. A race against the clock then began between the Assassins, the Instruments but also the Templars to find the diamond first.[4]

Eventually, the location of the artifact was found by Berg, who had relived Albert Bolden's memories during his time in the Spanish Civil War. In 2018, together with Charlotte and the Assassins, he made his way to the resting place of the jewel, intending to find it before the Instruments do.[4]

Ultimately, Violet's fears that Elijah was not to be trusted were proven right as he took his revenge on his mother's murderers, stabbing Richmond with a screwdriver and helping Charlotte to kill Juno. He then fled with the Koh-i-Noor.[4]

"We are one of many but essential to the unity of all. Splintered though we may appear within the limited notion of this moment, we exist as one, as we always have and always will. You have been fragmented, children, but know that you are also whole. Do not allow your concept of time to act as a paralyzing veil when the fate of all you hold dear rests in your hands. We speak through this vessel to you, this time and medium and anchor that we might commune. We must exist freely at all points for your race, our children, to exist and to remain free. Shroud this intelligent lens until you become united and can realize this heart, our heart, to be the one that endowed your precious breath. And never doubt the lengths to which we will go to protect what is precious to us."
―Durga, whilst possessing Pyara Kaur, 1839.

Durga appearing from the Koh-i-Noor

Durga as the Koh-i-Noor was shattered

Arbaaz and Pyara with the Koh-i-Noor 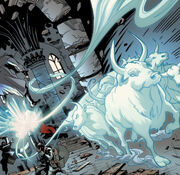