Knight's Hospital, also known as the Hospital of the Knights of Midsummer's Day, is a landmark in the Greek insular city of Rhodes.

In 2012, Knight's Hospital was used by Abstergo Industries as a simulated training location, in the second stage of the Animi Training Program.

The area was composed of a large castle, inhabited by patients or injured knights, and the surrounding town. Small markets were set up in and around the castle, with a large part having located themselves in one of the corners of the area. The town also featured multiple churches, a kind of plaza with a fountain and the famed Temple of Apollo. This entire community was enclosed by a vast wall, with numerous battlements.

Knight's Hospital, like most of the simulated locations in the first and second stage, had two aesthetic variations. As such, it could be utilized during the day or the night.

Concept art of Knight's Hospital during the day

Concept art of Knight's Hospital during the night

The Vanguard diving towards a haystack in an effort to shake off her pursuer, the Bombardier

The Trickster in Knight's Hospital, with more Animi Avatars in the background

A Champion killing his target, the Guardian, while his teammate chases another 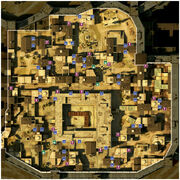 An aerial view of the Knight's Hospital map, with the Chase breakers marked
Add a photo to this gallery

Retrieved from "https://assassinscreed.fandom.com/wiki/Knight%27s_Hospital?oldid=790501"
Community content is available under CC-BY-SA unless otherwise noted.