The Knight had several unique moves:

Quietly approaching his target, the Knight unsheathes his greatsword, before he knocks their legs from underneath them with the side of his weapon. As they make contact with the ground, he hacks his sword into his victim's back, severing their spine and leaving them to bleed, following which he pulls his weapon out and stores it away.

Casually walking up to his target, the Knight pulls out his sword and strikes them in the forehead with its hilt. He then takes advantage of their defenselessness by piercing his victim's stomach with the weapon and withdrawing it quickly, watching them crumple to the floor, dead.

Walking over to his target from behind, the Knight removes his sword from his belt, before he chops downward into their shoulder. He then roughly slashes his sword through their body while he quickly pulls it out, providing his victim with a large fatal wound, before the Knight lets them collapse to the floor and succumb to their injuries.

Stealthily approaching his target from behind, the Knight draws his greatsword, before slashing it horizontally across his target's spine, causing them to go weak at the knees. He then follows through with his attack by wedging his blade into the right of his victim's abdomen, and proceeds to free his greatsword by forcing his victim forwards with his foot, the sword slashing through their side along the way.

Rushing towards his target, the Knight clotheslines them in the neck with his arm, making them topple onto their back. He then firmly stabs his sword into their chest and lets it go, before grabbing it with his other hand and pulling it out, taking the time to sheath his blade while his victim bleeds profusely, their heart pierced.

Running at his target from behind, the Knight spins with great momentum, before chopping them in the waist with his weapon, getting his greatsword lodged in their flesh. Forcefully, he slashes through their body with a mighty swing, dislodging his sword and spinning them in the process. Afterwards, while his victim lays dead on the ground, the Knight stores his greatsword back at his belt.

Nearing his seated target, the Knight stabs them in the chest, before lifting them from the bench and to the side. While they feebly grasp at the blade, they eventually go limp, and the Knight then pulls back the sword quickly, withdrawing the weapon and making his victim fall from its tip.

Grabbing his seated target's foot, the Knight drags them off the bench until their head rests against it. Before they can do anything to defend themselves, he forcefully kicks them in the face, violently sending their head backwards and breaking his victim's neck on the bench behind them.

Leaping onto his unfortunate target from above, the Knight crashes into them with gravity aiding his heavy armor, before removing his greatsword from his waist and forcibly chopping downwards into the middle of their head. Following this, as the Knight rips his weapon out his victim, he replaces his greatsword at his waist.

Leaping from above, the Knight unsheathes his sword in mid-air. As he lands on his hapless target, knocking them to the ground, he roughly impales their heart with the tip of his greatsword before leaving his victim to die from blood loss.

The Knight could also be customized in several ways:

In the second stage, the Knight was not customizable, alongside the Ottoman Doctor, the Ottoman Jester and the Courtesan.

Concept art of the Knight 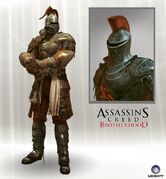 Official art for the Knight

Three Knights defending a VIP from Pariahs in Escort

The Knight being pulled to his death by a Dama Rossa

A pair of Knights assassinating their targets