Assassin's Creed Wiki
Register
Don't have an account?
Sign In
Advertisement
in: Articles that need updating, 872 deaths, Individuals,
and 9 more

Wolf Clan
Order of the Ancients

Kjotve the Cruel (died 872), also known as Kjotve the Rich[1] was a 9th century Viking who reigned as a petty king of Agder in Norway during the 9th century. He was the father of Hrolfr[2] and Gorm Kjotvesson. Kjotve also had a brother, Alrek who married Thora, sister to Kiarr Rawbone.[3]

In addition to being a ruthless Viking leader, Kjotve was also one of the first Norse members of the Order of the Ancients, operating under the cryptonym of The Axe and holding the rank Palatinus, in the Wardens of War sect.[4]

Rivalry with the Raven Clan

In 855, Kjotve led his Wolf Clan a raid on the settlement of Heillboer in Rygjafylke, leading to a confrontation with Varin and Rosta, the parents of Eivor Varinsdottir. Kjotve offered to spare the town further bloodshed if Varin surrendered and defied Viking tradition to die in battle. Varin agreed and allowed Kjotve to execute him, only for Kjotve to go back on his word and order the entire town massacred, including Rosta, although Eivor escaped.[5] It was also around this time that Kjotve caught the attention of a traveling member of the Order of the Ancients, who was impressed with both his skill and his ferocity in battle. He was recruited into the organization shortly thereafter, becoming the first Norse member.[6] For the following 17 years, Kjotve and his clan were harassed by Eivor and the Raven Clan, despite King Styrbjorn's reluctance to engage in open battle.

In mid-872, Kjotve was accompanied by his sons to the southern mountains of Rygjafylke in search of treasure.[2] Eivor and Vikings from her clan were hunting Kjotve and tracked him and Gorm to an abandoned hunting meadhall on the mountain summit, where they caught up with them. Hoping to recover important scrolls after killing both men, the Vikings attacked the pair but were soon overcome and heavily wounded, prompting Kjotve and Gorm to escape with the scrolls. Although incensed at their defeat, Eivor advised to wait for another chance to meet Kjotve.[7] Kjotve's youngest son, Hrolfr, would die during the raid.[2]

Hunted by Eivor and death

"How long have you been chasing me, Wolf-Kissed? Seventeen winters? Eighteen? Do I now haunt your dreams? Do I warm your loins? (laugh)"
―Kjotve to Eivor following her capture, 872.[src]-[m]

Later the same year, Kjotve's men captured Eivor and presented her to him. Kjotve mocked Eivor for pursuing him for seventeen years, before showing off Varin's axe. He kept mocking her, going so far as saying he would be pleased to kill her with her father's axe, before saying he envisioned her end in humiliation, as a slave. He left his men to deal with her and gave permission for his lieutenant Rikiwulf to use Eivor's crew for a blood sacrifice. Eivor, however, escaped their grasp and killed Rikiwulf in Avaldsnes.[8]

Eventually, Eivor and her brother Sigurd Styrbjornson, aided by the Hidden Ones Basim and Hytham, and King Harald's men, assaulted Kjotve's Fortress. There, Eivor challenged Kjotve to a holmgang to avenge for her parents' deaths, which Kjotve readily accepted, brandishing his two axes. At some point during the duel, Hytham attempted to assassinate Kjotve but was intercepted and thrown aside, severely injuring the Hidden One. Despite the interruption, Eivor continued their fight, and eventually managed to kill Kjotve.[9]

After his death, Eivor took a silver medallion bearing the insignia of an ash tree from his body.[9] Basim later explained that this signified Kjotve as a member of the secret organization known as the Order of the Ancients, an organization that he and his fellow Hidden Ones had been fighting for centuries.[10]

Despite being a Viking and strictly upholding the Viking tradition, Kjotve had no sense of honor and would break his own treaties if they benefited him. He would even go as far as to murder unarmed people in cold blood and actually see "beauty" in the carnage he causes. As revealed during his passing to Eivor, that Kjotve strongly adhered to the "survival of the fittest" philosophy and that it was the primary motivation for all the actions he has taken in his life, no matter if they were noble or cruel. His willingness to engage Eivor in a one-on-one duel sows that Kjotve holds a strong lust for battle and the thrill of a good battle, regardless of his age.

A physically imposing man, Kjotve possessed incredible physical might, strength, reflexes and endurance for a man of his build and advanced age. He was also battle hardened and overconfident and did not hesitate to mock his opponents mid battle to amuse himself during combat. Despite his advanced age, he was still more than a match for a much younger, experienced Viking like Eivor. Kjotve was so confident in his battle prowess and physical might, that he first chose to engage Eivor using his fists alone. His reflexes were seen when he took down a Hidden One mid air and continued fighting without any sense of mental shock or physical exhaustion.

Kjotve is a character in Assassin's Creed: Valhalla. He is voiced by Swedish actor Björn Bengtsson, who also voiced Finnr in the game.

Unlike his historical counterpart, Kjotve has two sons, Hrolfr and Gorm, not just the one named Thor Haklang (Tore Kjotvesson).[11]

Kjotve first appeared in a flashback in the first issue of Assassin's Creed Valhalla: Song of Glory, where his depiction is based on Yelim Kim's concept art of the character, with dark hair, a braided beard and mostly shaved head, rather than his look featured later in Assassin's Creed: Valhalla's "Prologue" memory sequence, where he is depicted with a full head of light-colored hair and a clean shaven face. The method with which he executed Varin also differs between the two, with Kjotve stabbing Varin through the chest with a sword in the former and cleaving Varin's head with his own axe in the latter.

Concept model of Kjotve in Rebellion 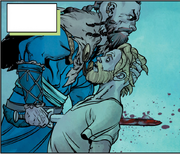 Kjotve killing Varin as depicted in Song of Glory

Kjotve impaled in the Memory Corridor

Kjotve as he appears in Rebellion