The Kingdom was a location rendered by the Animus, representing the Levantine countryside during the 12th century. The Assassin Altaïr Ibn-La'Ahad traveled from Masyaf across the Kingdom to Acre, Jerusalem, Damascus and Arsuf.

The Kingdom was made up largely of open plains and mountains, and contained numerous small villages and encampments. Twelve notable watchtowers were scattered across the landscape.[1]

During the Third Crusade, the Kingdom was a contested territory between the Crusader forces, based in Acre, and the Saracen garrisons at Damascus and Jerusalem.[1]

The western part of the Kingdom was actively militarized by King Richard I of England, while the eastern part fell under the control of Saladin and the Saracen army. Both sides had fortified their positions, and actively patrolled the area.[1]

During this time, both the Assassins and the Knights Templar had a notable presence in the Kingdom as well. Assassin guards were stationed throughout the mountain pass leading to Masyaf, while a number of Templar Knights were posted throughout the Kingdom's landscape.[1] 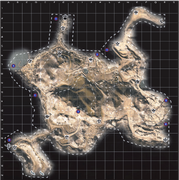 A map of the Kingdom