Khesesh Em Sesh Em Eeneb is a ruined Isu Vault located beneath the Great Pyramid of Giza, in Saqqara Nome.

Around 48 BCE, the ruins were visited by the Medjay Bayek of Siwa while tracking a member of the Order of the Ancients, Khaliset. There, Khaliset conducted rituals in the vault, convinced that with the ancient symbols and silica-powered pedestal, she would be enabled to resurrect her beloved daughter, Eshe.[1]

While investigating the ruin to understand what Khaliset's motives, Bayek activated the vault's pedestal and witnessed a recording made by the Khufu messenger.[1] Dated ninety-five days after the Great Catastrophe, the message displayed was intended for Layla Hassan, who was reliving Bayek's genetic memories in 2017.[2]

In 46 BCE, a priest named Menkhtu took possession his former master's mask and claimed to be the Ibis Reborn. Reorganizing the straggling remnants of the Egyptian Order of the Ancients into the Sect of the Ibis Reborn, he intended to enter the ruins and obtain the ancient power within to conquer Egypt. However, lacking the knowledge on the pedestal's activation process, his plans collapsed. Transferring his anger to the Hidden Ones who had hunted the Sect hoping to stop him, Menkhtu attacked them in a frenzied rage, but was fatally wounded and posthumously unmasked as an impostor.[3]

Floor of the main room

The pedestal in the vault

Script on the pedestal

Bayek in the vault

Broken arch in the secondary room

Ruins of the vault 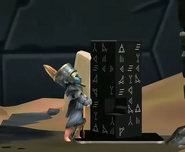 Menkhtu at the Vault pedestal